Weston Branch to back on Llangollen Val Hill No.3 bridge.

The morning got off to a fantastic start, when I opened the back cabin doors to find blue sky and sunshine.

The wind was so light that the reflections were amazing.

I took Paddy for his walk and as we stepped on to the foot bridge over the Weston Branch, I looked down into the water and saw thousands of tadpoles.

I could not believe my eyes, at the amount of tadpoles there were in the water, soaking up the sun on a concrete slab in the water. I have never seen so many in one place.

We had no hurry to be on the move, because we were heading up through the Frankton Locks and the lock keeper did not get there until 12 noon, so we had a leisurely morning. It did however seem that others were in more of a hurry to get to the locks before anyone else, because we stood and watched at least 5 other boats head to the bottom lock early, it transpired later that one of them had not booked in. K and I spent some of our time chatting to Helen and Leon on NB Dreamcatcher who were moored in front of us. They are a lovely couple and we had so much in common, it was a real pleasure to be in their company. We must have spent a good couple of hours nattering away to them about all things boating and not boating. Whilst we were chatting to them NB Amy pulled in opposite us to take on water. It turned out that Graham and Jan keep their boat at Debdale Marina on the Leicester Line and had seen us many a time go past.

What a small old world?

The boats moored at the bottom lock began to move, but with so many going up and some coming down, I felt we had time to kill, so made us a sandwich and a coffee for lunch.

1pm we set off from our mooring.

We reversed back across the junction and turned back on to the main Montgomery Canal, heading towards the bottom lock. on getting to the lock mooring, Keith could not get the boat in, so I walked down the gunwale and stepped off the bow, to walk up to the top lock to let the lock keeper know we were there, as we had booked in to go up.

We entered the bottom lock at 1.30pm after a hire boat had gone through, the pounds were very low, so I gave the hirers instructions on not to fill their lock until the boat in front was in the lock above, otherwise they could be left on the bottom. Keith crept along the middle of the pounds to reach the locks and I emptied the locks chambers to send him some water.

Whilst I was at the staircase lock, the lock keeper enquired as to whether I knew the name of a boat that had gone through, because they had not booked in and he wanted to write their name down, I had remember the boat because they were moored at Queen's head at the same time as us.

We exited the top lock and turned right back on to the Llangollen canal at 2.25pm, so not to bad considering the queue of boats going up and very little going down. We moored up at the 1st 48 hour mooring we came to, just before Val Hill No.3 bridge. We will be staying here for a few days to get some painting done on the boat, especially as the weather is supposed to be good for the next few days. 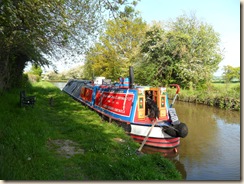