Here we are week 3 of January and already it has been hectic for me.

Monday began with all the usual boat chores. I reckon I could do them in my sleep, because I do them so often.

The day was tinged with sadness as we found out that a boating friend had collapsed and died on Sunday. It really shaped my day, as I was rather deep in thought. It made me re-evaluate my life and what I should be doing with it. Because the boating community is small and caring, we will all be caring for our friends partner.

Tuesday we had a rude awakening. We were rudely woken up during the night by a loud crashing. Keith climbed over me to find out what had happened. Marmite must have been sleeping on the ledge, fell off and knocked the electric kettle off the worktop. 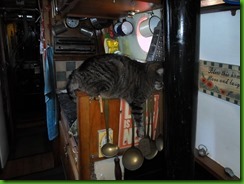 The ledge is only 2½ inches wide, but she loves to sleep on it. 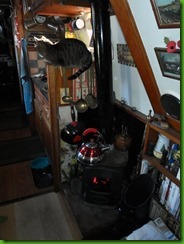 Having gone back to sleep, I woke again at 7.40am, which is late for me. Keith made us both a cuppa, which was enjoyed in bed. Once up it was the usual jobs and sorting the animals out. Paddy needed his first walk of the day. It takes longer these days, as his legs stiffen and fail him. Marmite was at the door waiting for our return, with only one thing on her mind and that was food.

After breakfast, I had a laundry wash to do in the Arms laundry room, which took me just over an hour. Whilst there, I took in the post and nattered to the Winter moorer’s who passed by. After an early lunch Keith headed off to his new home Screwfix. This place has been a godsend since we have begin the room building in the hold. He also went to Homebase for paint and brushes, because I want to get some paint on the hull lining to get it sealed. After lunch I had to go and wrestle a Spaniel. Yes you did read that correctly. Jacky our administrator and my dear friend, wanted me to help her with her Spaniel Poppy, who needed to have her ear washed out. Poppy had had an operation on her ear and it needed cleaning. To do this job it would require the both of us, because Poppy is a struggler. I was in charge of holding Poppy still whilst Jacky worked on the ear. The ear cleaning went well, but we could not redo the cone of shame back up, so plan B was to get her in the car and up to the vets. Thankfully the nurse sorted out a bigger cone and we now know how to put it back on. I will be helping out for the rest of the week, which I am now calling Wrestle a Spaniel Week.

Tuesday evening was spent in the presence of the other trustees and directors of the Arm. It is always very informative and a good chance to catch up on what our objectives are.

Wednesday dawned and it was a tad nippy in the back cabin. We had had a smattering of snow on the pontoon, but nothing to write home about. Oh wait a minute I am home

. No sooner the first chores of the day were done, I relit the back cabin stove and put a chicken in the oven to slow cook for lunch. I was then in charge of putting a sealing coat of paint on the new wall in the hold. 1 part water to 5 parts paint went on with a 2” brush. Because of it being chilly, we put an electric fire on to add the drying process. I managed to get the painting done before lunch. The roast chicken lunch with Yorkshire puddings was scrummy. Bread and Butter pudding followed with ice cream. Lunch over, it was time to fill the water tank, get the coal in and wrestle a Spaniel.

Since before Christmas we have been running a small freezer alongside out fridge/freezer, but now that the Christmas food has all gone, I have turned the small freezer off. There is no pint running two half empty freezers. Not only that the freezer is a mains one, where as out fridge/freezer is 12 volt. I cannot see us having it running again until the end of the year again in time for Christmas.