Good Friday today and for us it sure was.

Having gotten up and walked Paddy, I had an early job to do and that was to dig out some of the mint plant which was spreading like wild fire in the sensory garden. When it was planted it should have been contained, but it wasn't and now it is rampant. So I got stuck in to digging most of it out and then replanting the plants which had been hidden by the mint. With the job done and a coffee consumed, Keith and I walked into the town to get a couple of things which included a Raspberry bush, wool for my crocheting, a small hand fork for Keith and a new pair of Summer shoes for me, because I have nothing for the Summer as we would normally be on the move, so I would be wearing my steel toe capped shoes all summer. With nothing else needed we began the walk back, when I remembered we were out of Lemonade, so we nipped into Sainsbury's for a bottle of their cheap Lemonade at 17 pence a bottle. Since Keith has been home from the hospital he has developed a taste for the drink, which he never used to have. He has also gained a taste for Pizza and Ice Cream.

Back at the boat, I plunged the Raspberry bush in to water, because it said to do so for an hour Whilst that was soaking, I got on and cooked some lunch. Keith sat outside and enjoyed the sunshine until lunch was cooked. After I walked round to the Trust Pets store to get some suet for my Robin and on the way back saw a boat heading up towards the winding point in the arm and it turned out to be our very good friends Steve and Christine on NB Amy Jo. It was a wonderful surprise to see them and their new boat. I have followed their blog and the building of AmyJo and know just how excited they are about having her, so to see them and her in the flesh was fantastic. 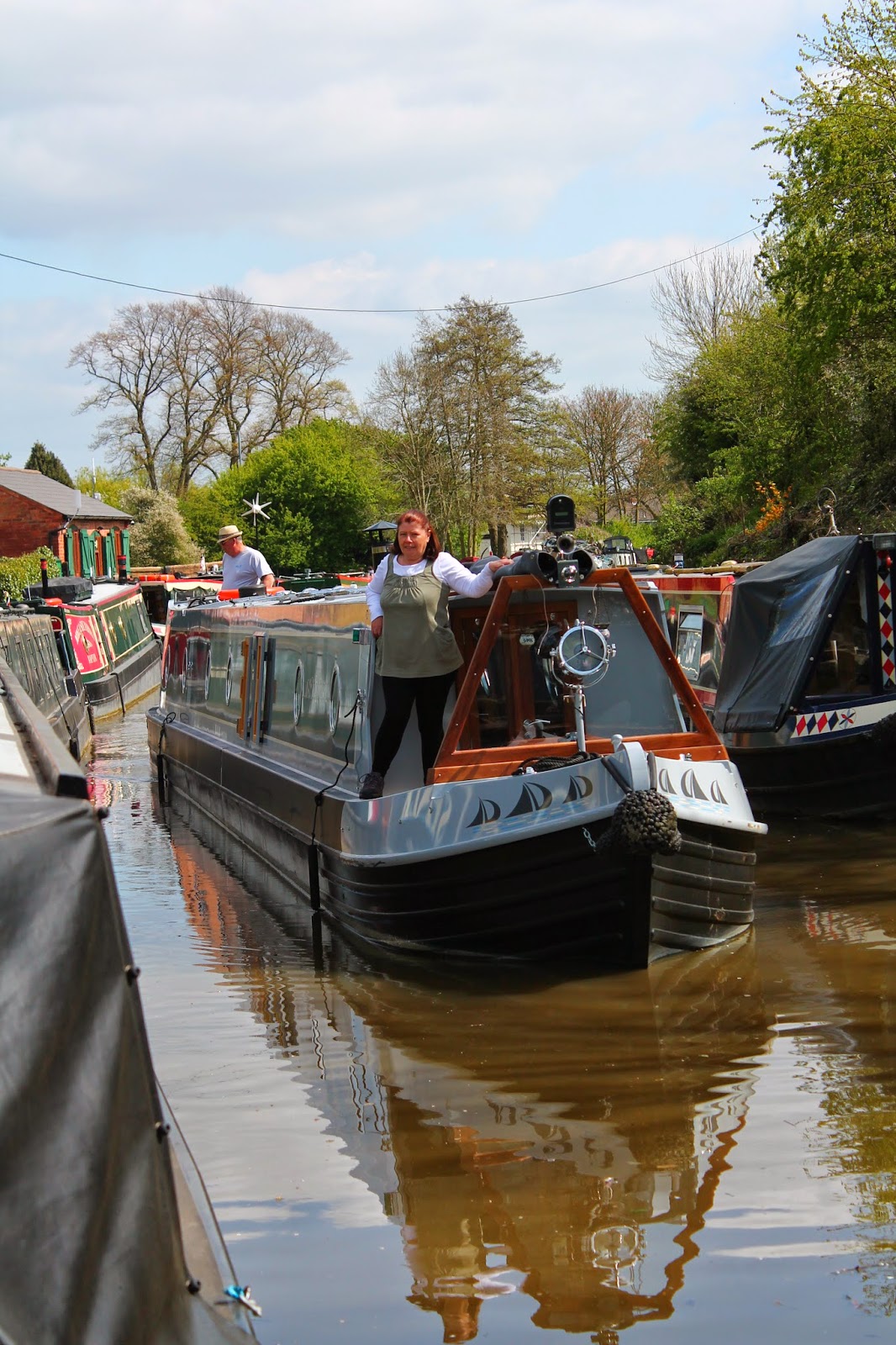 With a few boats in for the Easter break, we tried to get AmyJo moored up in the winding 'ole, but it was to shallow for her, so Christine and Steve decided to take her out of the arm and back online and moor on the towpath, which was a real shame. We made arrangements to pop out to see them at 2pm for a cuppa and a good old chin wag. 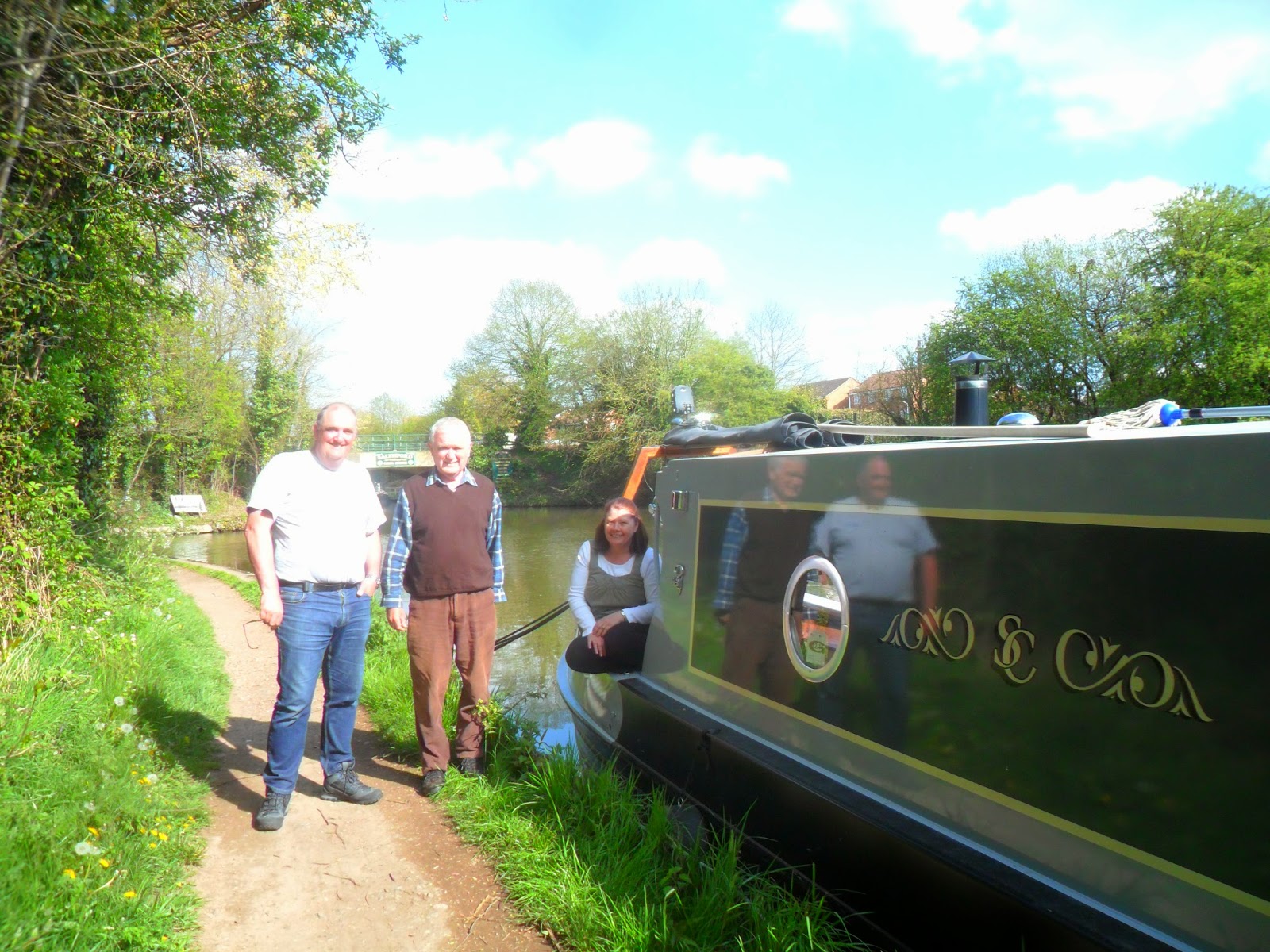 After an enjoyable catch-up sitting in the front cratch, we were given the grand tour of their beautiful Fernwood boat. Both Christine and Steve are wearing big smiles and we can see why, because the boat is lovely. Having probably outstayed our welcome and with Keith getting a little tired and uncomfortable, we said our "Goodbyes" and left Christine and Steve in peace to enjoy the rest of the afternoon sunshine. It was so fantastic to see them again and we hope we may see them somewhere when we are out cruising again.
We also had a visit from Chris from NB ......... I cannot for the life of me remember the name of his boat, but know him and Gail from the Leicester line and Welford. Chris could not stay long as he was busy, but I do hope we will see him a gain soon.