Hurleston Bridge to between bridges 25 and 26 on Shroppy Middlewich Branch. 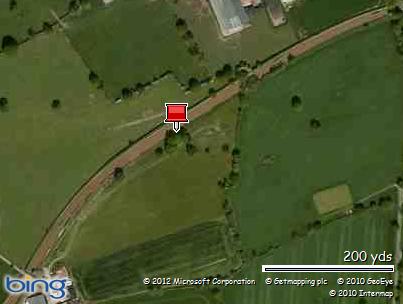 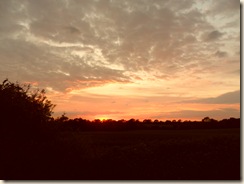 After a lovely sunny day, last night I was treated to a fantastic sunset. I had to stand on the roof of the boat to get this photograph, because the stinger nettles were blocking my view.

We watched the footie and enjoyed both matches, I did feel sorry for the Republic of Ireland, who now have an up hill struggle having lost 3-1 to Croatia, but you never know miracles can happen. The Spain, Italy game was very good and they drew 1-1.

When we got up this morning it was a little overcast and there was a sprinkling of rain drops on the canal, but nothing to much to dampen the spirit. 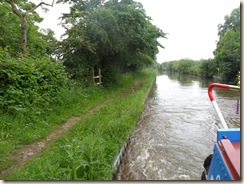 We left the mooring at 8am and headed the short distance to the sanitary station at the top of Hurleston Locks. 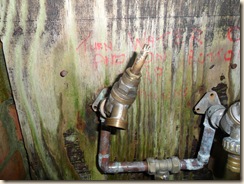 The first tap nearest the locks was broken, so we had to pull the boat back to the second of the water taps. Keith is going to report the problem to BW. Whilst the tank filled, we emptied the toilet cassette and got rid of rubbish. It took an hour to fill the water tank, but whilst we waited we got chatting to some Americans on a Black Prince hire boat, who were on their second canal holiday and loving every moment. 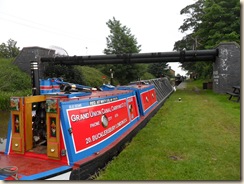 Finally at 9am we were ready to set off down the locks, behind a gentleman single handing. 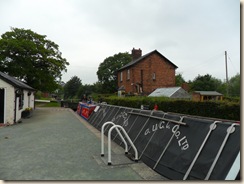 Linda (ex-lock keeper) and her husband came out to give us a hand down the flight. 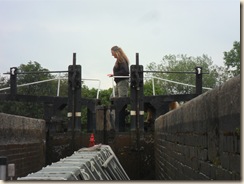 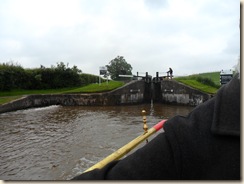 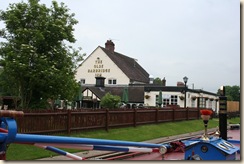 Onward towards and through Barbridge. We turned at the junction at 9.35am.

We got to Venetian Lock and as always there was a queue at the top and bottom of the lock. Every time we have been through here, we always queue. The weather had really warmed up and the sun was trying hard to put in appearance. 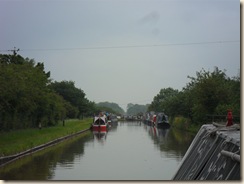 Having stepped off with the centre line and pulled the boat in, I walked down to the lock to give assistance, only to listen to a gentleman waiting in the queue moaning about how he hates queuing and how slowly people wind the paddles. I did have to question why he was on the canal in the first place. I then told him that when people are using the locks, it is up to them how quickly they wind the paddles for their boat, you may not like the way they do it, but it is up to them. This seemed to quiet him down somewhat. 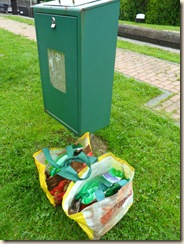 Along side the lock is a dog bin and just look at what some boater left behind. All the boaters in the queue walked straight past it, not even thinking of picking it up, so as soon as we were in the lock, I put both bags in the hold. I will make sure the rubbish is disposed of when we reach other sanitary station bin. Why, oh why do boaters do this? 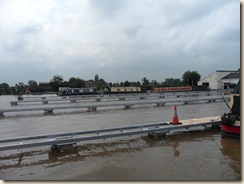 Venetian Marina is coming along nicely, with new pontoons and some dredging going on.

At Minshull Lock again we were in a queue, where we met up with NB Thyme, Karen was laughing to herself at the antics going on at the lock. For some odd reason one woman was measuring each boat in the lock to make sure they were not hitting the top gates and another woman from New Zealand was in charge of showing people how to work the paddles. I just stepped back and let them get on with it. The woman measuring the boats, reckoned she had been there for an hour, I am not suprised if she measure every boat ha ha ha. 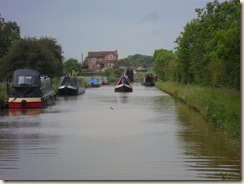 We cleared Minshull Lock with no hassles thankfully. To get back on the boat I walked down to Nanneys Bridge, because the lock moorings were busy. On route I made some lunch to eat on the run along with a coffee. There seemed to be plenty of boats on the move. 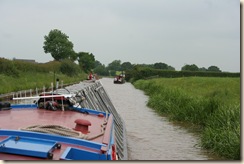 This hire boat was not sure which side of the canal they wanted to be on. 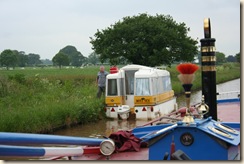 We followed this very sweet Caraboat for quite sometime. It is just like a caravan on water.

Having had 4 hours and 50 minutes of interesting cruising we finally moored up outside of Middlewich a little away from the bank, but heyho. 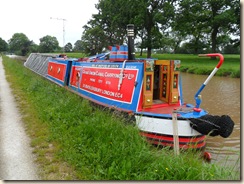 We decided not to try and make it into Middlewich in case there were no mooring spaces, because with the Middlewich Festival this coming weekend, we know some boats are already there, which will mean a lack of mooring places.

England play this evening and so we will be watching the match and keeping everything crossed like the rest of the country.