Time for a stroll.

With the sun out and a gentle breeze it was a good day for a stroll, but not before all the usual jobs were done.
The morning started as always with a cup of tea. Marmite was on the rampage because of no food in her dish. 8.10am we were up and Paddy and I set off down the towpath, Paddy managed to find places to get down to the river, not that he will ever go in, because he does not do water. Back on the boat it was time for breakfast, the generator went on to charge the batteries as well. After breakfast I got on with tidying the back cabin, because the rag rugs needed shaking and the floor swept. The stove was blacked and the brass polished. I do like a tidy back cabin. I also made us a coffee, which I drank whilst chatting to Alan and Lin NB Farthings Hook, they were leaving to head for the lift, as they are going up in the morning, so after a nice chat we said "goodbye". I am quite sure we will see them again.
We decided to go off for a stroll as the sun was shining and it was feeling nice and warm. 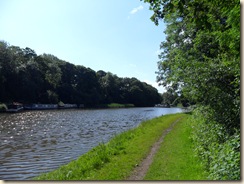 We walked along the towpath back towards Saltersford Locks and took a right up a footpath, which lead us to Salterford Tunnel on the Trent and Mersey Canal. 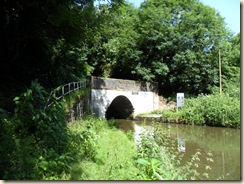 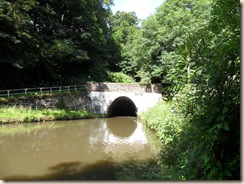 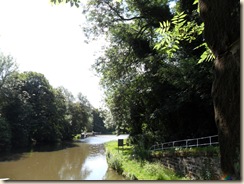 From above the tunnel entrance.
From the canal we walked up another footpath and found ourselves in Barnton, which has a couple of useful shops. 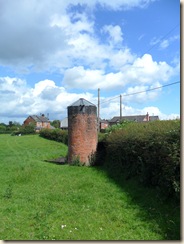 Along the way we spotted this air shaft for Barnton Tunnel. 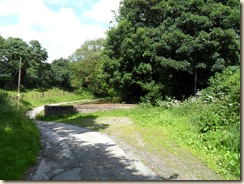 Following the road, it took us down beside Barnton Tunnel and back on to the Trent and Mersey towpath. 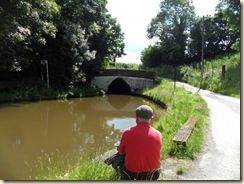 We could hear a boat coming through Barnton Tunnel, so sat and waited to see it poke its bow out of the portal. We knew there was a boat in the tunnel, because we could hear the bow thrusters in action. 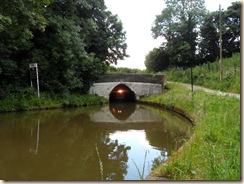 Having seen the boat come out of the tunnel, we made our way back towards Saltersford Tunnel. 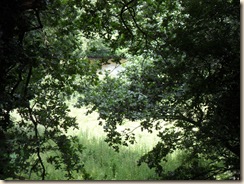 We could just seen the River Weaver from the canal towpath. 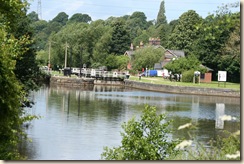 Back on the River Weaver towpath, I spotted someone at Saltersford Locks that we both knew, it was Roy and his dog Thomas off of Gerald No13, so we walked down to the locks to say "Hello". 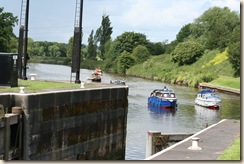 Whilst chatting to Roy, some boats from the Acton Bridge Boating Club arrived to come up through the lock. 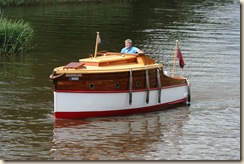 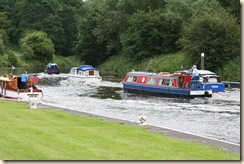 Who ever gets there first, buys the beer.
Having seen the boats leave the lock, Roy, Thomas, Keith and I walked back along the towpath to our boat, where we parted company with Roy, we will see him again in a couple of days.
Lunch was made and then the heavens opened. 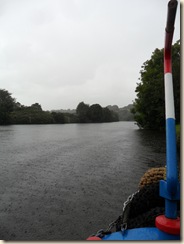 Right now the sun is trying to come out again, but the sky does not look happy, so we will probably have more rain. TV is on and I am now going to put my feet up for the rest of the day ;0)
Posted by Jo Lodge at Saturday, June 30, 2012