Marmite knows how to chill out. 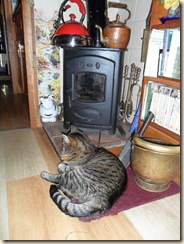 First she warms up in front of the fire. Marmite hates being cold. 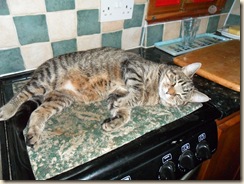 And then she chills out on top of the gas stove.

After yesterday's deluge of rain and it blowing a gale, today (Saturday) has been much calmer and no rain. The day has been spent doing very little, which is not like me. I walked Paddy in the morning, made up the saloon stove, which is now working overtime, made lunch and watched films, I also cooked some meat balls in bolognaise sauce for dinner, which was put on top of the saloon stove to cook, no point having the the stove going and not making the most of it, I also keep a couple of kettles on there as well to heat the water ready for boiling for tea and coffee, it saves on the gas when I want to boil a kettle. Keith and I were sat watching "Home Alone 2" (nothing much else on the TV), there then came a knocking on the boat. Stood on the towpath were Margaret and Peter off of NB. Kelly Louise. Margaret and Peter moor their boat near Swanley and as they were on the boat for the weekend, they thought they would come and find us, which was really lovely of them. I so enjoy putting names to faces as they had both been following the blog and leaving comments on some of my postings. Once invited in and a cup of coffee made, we got down to talking about anything and everything as you do as a boater. A lovely time was had, but all to soon it was time to say our goodbyes, but I am quite sure we will see them again sometime. So Margaret and Peter if you reading this posting, Thank You for taking the time to come and see us, it was lovely to meet you both. With the stove working overtime it did not take long for dinner to cook, and the decision was made to let the stove go out, because we were sweating our eyeballs out even with the doors open.

Who says it is cold on a boat?.

The evening will be spent watching Euro 2012 as was last night. I am not a mega football fan, but I do like watching the tournaments. I just hope that when England play on Monday we manage to put on a good show.