I need not tell you about the weather, because it is the same as yesterday hissing it down and was all night.

Last night having walked Paddy and fed both him and Marmite, Keith and I joined other boaters at the festival for the curry night at Wetherspoons Penny Black in the high street, Northwich for a fantastic evening of eating, drinking and laughter. It was really nice to sit down with boaters we know and those we have only just met and have a great meal and conversation. There must have been at least 30 of us and the staff at Wetherspoons were fantastic. After a great evening, we got back to the boat at around 10.30pm and I was off to my bed. No sooner I had settled down the rain began to fall and throughout the night, every time I woke up it was still lashing down, which is not what you want when your on a river.

I woke up properly at 8am, Keith got up to use the bathroom and Marmite got into his place for a warm, as it was rather chilly in the back cabin, I was seriously considering lighting the stove. After a cuppa it was time to get up and take Paddy out for his walk, as we stepped off of the boat the rain did stop for a while, but that did not last long.

There has been a steady stream of boats arriving all day. 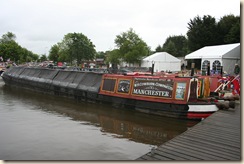 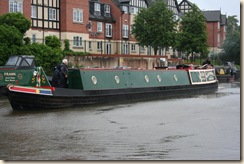 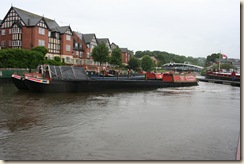 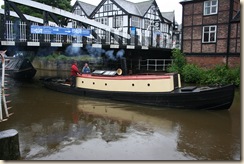 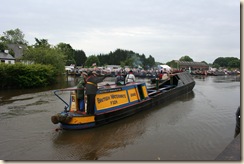 Some had come off of the Manchester Ship Canal. 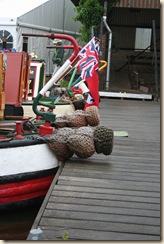 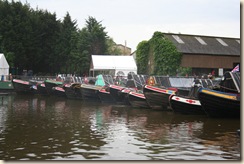 The rain did not stop play as the site took shape. 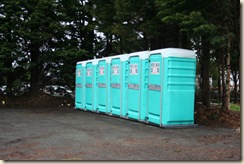 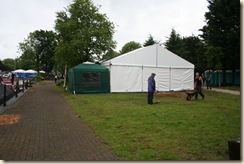 The music tent has its stage and the groups are beginning to set up for later on, I will post photographs of that tomorrow. Everyone is having a wonderful time and so are we.