Bartington T&M to George Gleave's Bridge No.3 on the Bridgewater Canal, Preston Brook. 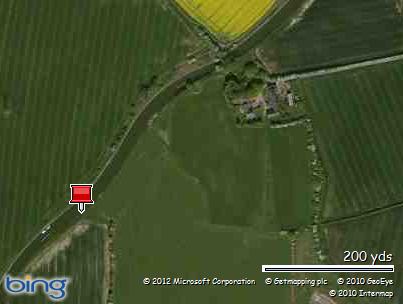 Yesterday I spoke of how the hire boat got a spurt on eventually, well they did not get a spurt on, we slowed down and the reason was because we had picked up a load of rubbish on the prop. Keith had his suspected there may have been something on the prop, so delved into the weed hatch to discover, old nylon rope, plastic bags and a pull chord from a plastic cruiser, so no wonder the hire boat got away from us. Having cleared the prop, we put the anchor back in the gas locked and the rope in the hold, that will not be needed for a while. With no decent TV signal we got the DVD collection out again and I have started right at the beginning of our collection with the films beginning with A, so the first of the for the night was "A Bugs Life", after that it was "A Few Good Men". 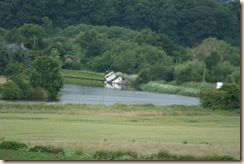 This morning it was a bright start. Paddy and I strolled off up the towpath, with a Kingfisher whooshing past us at break neck speed. on walking back the to boat several Butterflies were fluttering in the hedgerow and the birds were singing. From the roof of the boat I had a clear view of MV Chica on the River Weaver. 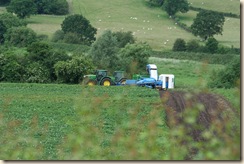 In the field next to our mooring a farmer was getting in his potatoes. 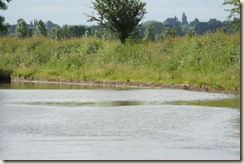 9.10am we left our over night mooring and the sun was shining, unfortunately it did not last to long. We did not have any rain and it was toastie warm. 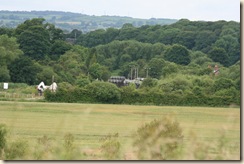 At bridge 211 we could see Dutton Locks, just like on our walk the other day. READ

At times the canal was very narrow due to reeds en-crouching across the canal. 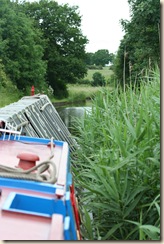 I was just glad we met nothing coming the other way because we could not have got over anymore. 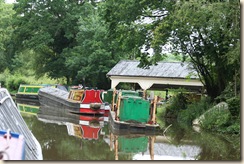 Alongside the canal is Longacre Wood, an important wildlife corridor, with a wide variety of hedgerow and wild meadow flowers found in abundance and the smell of wild garlic
is particularly prominent in April and May.

We passed the dry dock at Dutton Stop Lock. If you think that the ornate roof resembles Victorian railway architecture, you’d be
right because it was built by the North Staffordshire Railway Company which formerly owned the canal. Working boat Buckden was moored up by no sign of John or Sue. 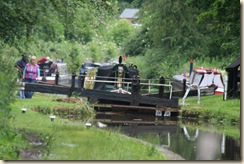 Ready to come out of the lock was a boat, so we had timed it just right to slip into the lock after them. 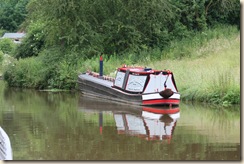 Empress was moored up just before the tunnel. 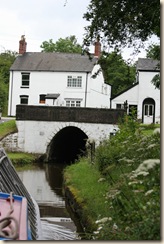 At 10.05am we entered Preston Brook Tunnel which is 1239 yards long (1133 metres). The properties above the tunnel are all listed buildings with a distinct character. We were now on the Bridgewater Canal. 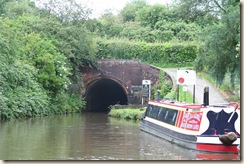 Having exited the tunnel, we saw Jeanie Deans moored up ready to enter the tunnel, the couple that own the boat had been moored in Market Harborough for a couple of years whilst they fitted the boat out. We said "Hello" as we passed by.

Having passed Claymore Hire Boats we stopped at Midland Chandlers to pick up some paint and electrical supplies and who should also be there but Richard on Pangur Ban who we met a few days ago on the River Weaver. 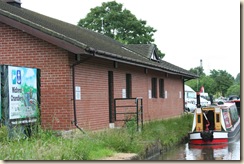 We had a quick chat with him before leaving to go up the Runcorn Arm to empty the toilet Cassette. 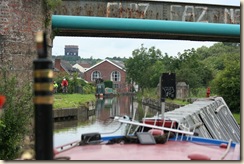 After emptying the cassette at the marina, instead of going to the end of the arm, we reversed into the marina entrance and winded.

We were now back out on the Bridge Water Canal and looking for somewhere to moor for the rest of the day. We passed the place we moored for the IWA festival in 2005 with our other boat. We eventually moored up near George Gleave's Bridge No.3 on the Bridgewater Canal, Preston Brook. Moored in front of us are Rita and Scooby on NB Festina Lente, who arrived early in the afternoon. 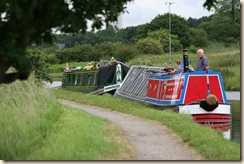 During the afternoon having chatted to Rita on the towpath as I photographed the wildlife, we were invited to join Rita and Scooby for coffee, which lead to us nattering for more than two hours. It is incredible how the time flies when you get talking all things boating and putting the world to right. Come 6pm it was time to leave them both in peace and head back to Hadar, where I got on with cooking dinner, whilst Keith walked Paddy. Rain has been steadily falling throughout the afternoon and it now has a feel like Autumn, I am beginning to think I may have to light the fire again arghhhhhhh it's July, this is not what is supposed to happen, but we are talking Great Britain here.

Wildlife Photos are on Canalside Flora and Fauna.