I slept like a baby last night, having gone to bed at 9.30pm after a busy day working our way up the locks. It was so quiet in the marina, I did not hear another living soul until I woke nine and a half hours later.

When I did wake up, the sun was shining and still it was all so quiet outside, it is hard to believe we are in Manchester.

7.30am I got up to make a cup of tea and some toast which was enjoyed in bed, whilst we watched the TV in bed. Oh such luxury to be on the electric. It is nice to do it once in a while, but I think I would soon get bored with being tide to a hook-up. I know one day, when we can no longer cruise due to age or ill health, we will seek out a mooring and we will then be on hook-up, but until that day comes we like the life of continuously moving around the country. Whilst we eat breakfast in bed, the washing machine was on doing yet another wash. I plan to get everything washed that needs washing this weekend, just as well make the most of being on hook-up.

9.00am, I finally had to get out of bed to take Paddy out for his walk. We had a wander around the marina, which is going to be wonderful when the wildlife part has grown into itself (photographs tomorrow). Back on the boat, I waited for the washing to finish and Keith was on his laptop, but once the wash was done, we closed the boat up and set off to explore Manchester once more. We went into some of the shops like Go Outdoors, and an M&S Outlet, I am looking for a new hat, but as yet have not been successful. 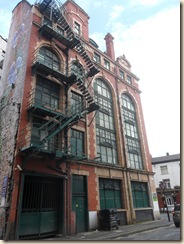 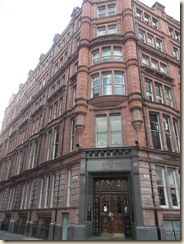 We walked up into Piccadilly, along some of the roads we had not looked down. 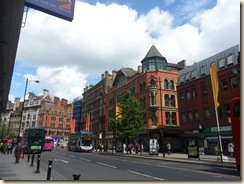 With the time heading towards lunchtime, Keith suggested we go and have lunch in China Town again and this time try another buffet. The other day we went to "International Buffet" which was good, but you could not help but notice that the place needed some paint. It had a worn out look and there was an untidyness about the place. Today we tried "China Buffet" and what a difference, the place was well kept and clean and everything had its place. The staff were friendly and most importantly the food was lovely. They had a few choices of food we had never tried before, which was very good. I would totally recommend the place. By the time we came away from there, the place was almost full. After such a lovely lunch, it was time to explore a little more of Manchester and this time we walked down Canal Street, where you will find the gay village. 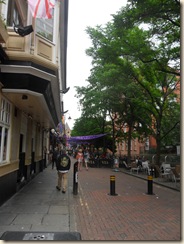 I had been told it was a vibrant area, and that was clear today with people milling around. 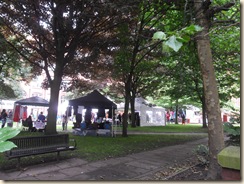 In the Sackville Gardens area Sparkle 2012 was taking place. Sparkle was founded in 2005, originally as a day to celebrate all things transgender and it looked like it is still sparkling seven years on. I can certainly say it was interesting and an eye opener, but glad we went and had a look. I am all about live and let live. 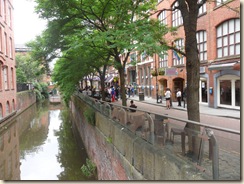 We carried on up Canal Street, heading back towards the marina along side Piccadilly Basin, which is now a car park. 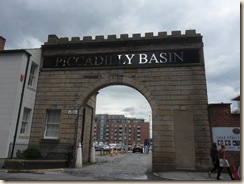 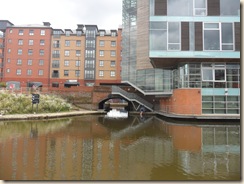 Piccadilly Basin, which also leads off to the Ashton Canal.

Before getting back to the boat we called into the shopping park, where I bought a tank top at a YMCA charity shop for £1.49 (last of the big spenders).

Back on the boat, the washing machine is back on as is the drier. The TV is on and we are watching "Live and Let Die" and oldie but goodie. I have no plans for the afternoon, except to get the washing done and then get it dried and put away before we come off of the electric tomorrow afternoon.