Yesterday (Thursday), how pleased was I to see the sunshine when I woke up. Someone was smiling down on us and the trust, because it was the public launch day and we were involved in quite a big way. After breakfast, we set about getting ready for what was going to be a busy old day. 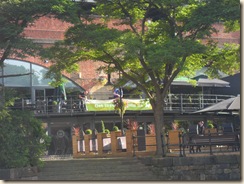 The banners were going up, as was the bunting and Hadar did not escape. 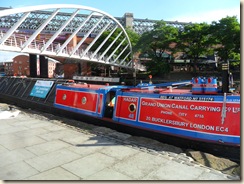 A blue banner on one side. We then winded the boat. 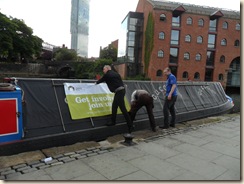 A green banner for the other side. Steve and Mark from the trust giving Keith a hand. There was some official meetings taking place first thing and whilst they took place the trust staff got on with putting up balloons and banners.

Keith and I got into our togs and waited for Ellie, who works for the trust and was going to be handing the sign over to an other trust member in the lock. 12pm Ellie arrived and we reversed back down the canal to the sanitary station where we pulled in alongside one of the trip boats, to await the signal to precede to the lock. 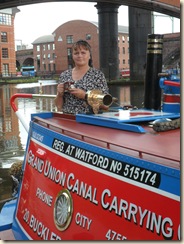 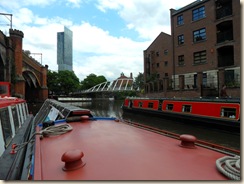 12.40 the signal came to head for Dukes Lock, which was being worked for us by Kevin and Ian who are volunteers. 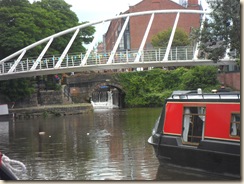 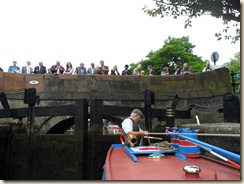 There was quite a crowd waiting for us and the new sign. 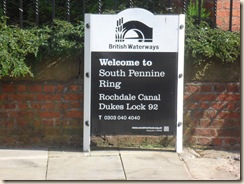 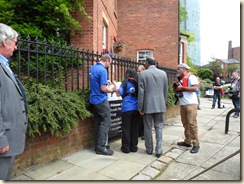 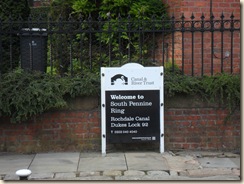 After the speeches and formalities we then moved out of the lock and onto a mooring, but within half an hour we had to reverse back into the lock for the BBC lunchtime news, who wanted to do a live broadcast. 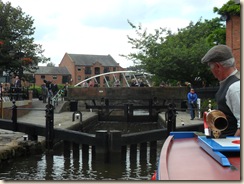 The reporter for the North West had been doing something on the canal everyday on the evening news and he was there to interview Walter Menzies, which Hadar in the background with her engine thumping away. It all worked really well. 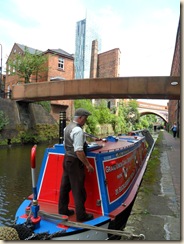 Back out of the lock again, we moored above the lock for the rest of the day.

Keith and I were then invited to the rest of the celebrations, which included more speeches, a quiz, food and free drinks all day. 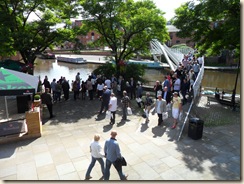 All the Canal and River Trust employees then had to go down to the canal for a group photograph.

The whole day was fantastic, we were given a bottle of sparkling wine for taking part, it was really appreciated by the bosses. Everyone was given a goody bag which had a commemorative glass, plus lots of information about the trust.

I know many unsure as to whether the Canal and River Trust if going to work, some people are against it all ready, but I am of the opinion, do not knock it until you have tried it. Some of things that were spoken about at the launch sound very exciting and if they come off it could mean exciting times ahead for everyone on the canals and rivers.

Keith and I thoroughly enjoyed our day.