There is something rather beautiful about places at night, when all the lights are on. The Whitby and Bird Merchants Bridge looks stunning lit up, although it does need a few new bulbs.

My evening was spent with my feet up and the DVD player on, last night I watched "An Officer and a Gentleman" with the adorable Richard Gere, followed by "Antz". Keith and I are still wading through the A section of our comprehensive DVD collection.

I slept like a baby last night, having not been sleeping to well due to the Menopause, any woman reading this who is going through the same will understand. It is very annoying to be laying wide awake in a cold sweat, which your other half is snoozing happily, but that is the joy of being a woman.

Woke up at 5am to the sound of a Canada Goose nattering near the boat. Perhaps it is the goose equivalent of a cockerel announcing the morning. Anyway it woke me up after such a good nights kip. Then someone was knocked the hell out of what sounded like mooring pins being hammered in, but having looked out of the back cabin doors I could not see the culprit. Marmite then decided it was time to go crazy, she was charging up and down the boat meowing loudly, trying to encourage Paddy to play, but of course he was having none of it and so stayed in bed.

8am and it was time to make a brew, which we drank in bed. Rain was falling yet again, but when stop when I was up at 8.30am to take Paddy out for his walk. Apart from a long the towpath, there are not many places to walk dogs, but Paddy really does not care as long as he can do what he has to do. Another thing I have noticed, there are no dog poo bins, so it is just as well I always take my small spade out with me.

Back on the boat, I laid up breakfast and could not help but notice through the galley wind that workmen were erecting scaffolding.

You can only see three men in this photograph, but there were in fact five of them changing light bulbs and to do this they had to erect the scaffolding around each lamp, before climbing up and changing the bulbs. Whatever happened to using a ladder? It reminded me of the joke "how many men does it take to change a light bulb?" But in an age of H&S and a compensation culture, I guess they cannot take any chances.

After breakfast a cuppa and the batteries charged, we set off for our day out in the city. We were going to catch one of the trams to Piccadilly, we walked to the nearest station and put £1 each into the machine and got our tickets.

This was a first for me, I have never been on a tram before, yeah I know I am a sad person lol.

Within minutes our tram arrived and we boarded it and found seats for the short jaunt through the city. We arrived at our destination, after stepping off the tram we set off back into the city.

This is the old London Road Fire Station and was opened in 1906. The building is huge and that is because it also housed  a police station, an ambulance station, a bank, a Coroner's Court, and a gas-meter testing station. The fire station operation for 80 years and in that time it housed the firemen, their families, and the horse drawn appliances that were replaced by motorised vehicles a few years after its opening. In 1942 the station was visited by royalty, in recognition of the brigade's wartime efforts. Sadly the fire station closed in 1986 and has not been used since, it is now on the buildings at risk register and has been since 2001. Such an amazing building deserves a life.

We then visited Manchester's China Town, which is one of the largest in Europe. The China Town archway is on Faulkner Street and was completed in 1987. 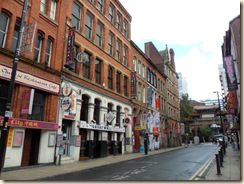 Walking around the town we saw many Chinese restaurants, shops, bakeries and supermarkets, for us the buffet was the most important place, because we wanted to enjoy one for lunch, we were spoilt for choice because there were four to choose from. Before lunchtime we went to the market in the Arndale Centre. 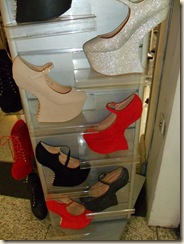 How are you supposed to walk in these???

A lot of the stalls were not to our taste, but there was a pretty good selection of clothing, shoes and party wear. With lunchtime approaching we wandered back to China Town and went into a buffet where we had a lovely lunch for £5.95 each plus drinks, it was worth every penny. 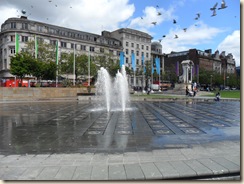 We  walked back to the boat through Piccadilly Gardens and along the canal. 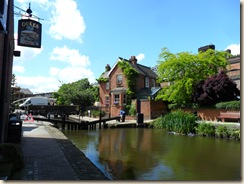 The Canal & River Trust crew were tarting up the lock gates ready for tomorrows official launch. I am just hoping the weather is going to be good. Whilst admiring the work they were doing Mark who we have been liasing with about the launch was at the lock, so we touched base on what was going to happen. We also wet his boss, who came and saw the boat. We are now fully prepared for our part in the launch tomorrow, I have polished the brass and tidied the boat. There is nothing more I can do, except hope that the weather is kind to us.