I said in my previous post, I was eager for a wander, so after some lunch we locked the boat up and went into the city to find our bearings. 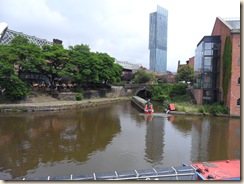 Walked up over the bridge in front of our boat and had a look at the basins. 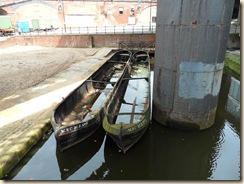 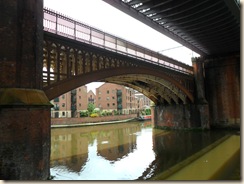 Then off up over Castle Street Bridge. 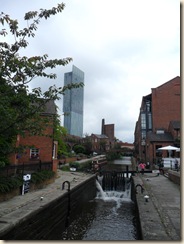 There was plenty of water flowing over the gates at Dukes Lock, with the Hilton Hotel building standing proud in the background. 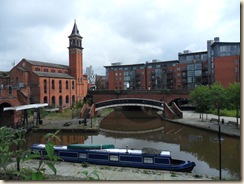 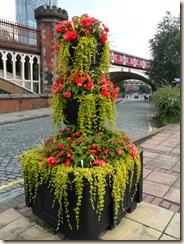 There are some fantastic bridge arches to be seen. 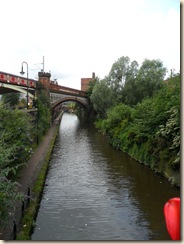 We knew we were getting closer to the city centre, because the crowds of people got more and more. 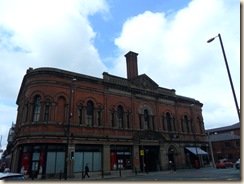 There were some stunning looking buildings. 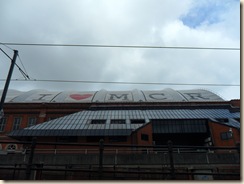 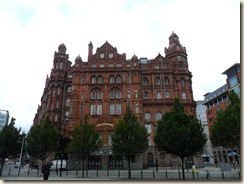 The Midland Hotel is a 312 bedroom grand hotel. The hotel was built in 1898 and opened in September 1903, it was built by the Midland Railway to serve the adjacent Manchester Central railway station. It really is a stunner of a building. 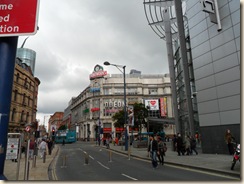 The Printworks building was home to a printing press, owned at the time of its demise by Robert Maxwell. It stood empty until 1998, then in 2000 it reopened as an entertainment venue. It contains mostly bars and clubs, including a Hard Rock Cafe as well as a leisure centre and a 23-screen Odeon cinema. Whilst I admired the building, I got the chance to watch the local Peregrine Falcon. Manchester Peregrine Falcon Project follows the falcons around the city in a partnership between RSPB and MDDA. The RSPB were there with their telescopic cameras allowing people to see one of the adult birds sitting on one of the insurance buildings, which is apparently where it can been seen throughout the day. This year the adult pair had 4 chicks, which are now flying around the city keeping the pigeon population down. 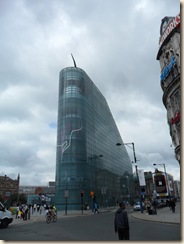 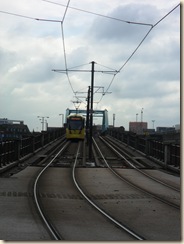 I am really impressed by the tram system. The sound they make when they stop and move off sounds like a steam trains hooter(still a child). We may take a trip on one whilst we are here.

We had a walk around the Arndale Centre, which is just like any other shopping centre in a big town or city. We then found we needed a coffee, so went in search of a cheap coffee and could not find one anywhere, so ended up going into a Caffè Nero for a cup of tea which was the cheapest thing they do. I refuse to pay £2.50 for a cup of coffee, it is day light robbery in my eyes. Having got our bearings a bit we walked back to the boat. So far I really like Manchester and all it has to offer.

I am sincerely hoping that the noise from the trains and the pub close by do not keep me awake tonight. Because there was no where else to moor we are close the the railway, but fingers crossed once I am asleep I will stay that way tonight, otherwise I may have to get the ear plugs out ;0).

Dinner is now cooking, Paddy and Marmite are out on the back counter and all is well in my world.