Another bright start to the day whoo hoo maybe the forecaster have it wrong for once ;p).

We had the usual cup of tea in bed, but this time it was made by Keith. We both had a much better nights sleep thankfully. Mooring closer to the Packet House meant the road noise was blocked out and we did not have someone running their engine late into the night.

I was up just after 8am and was then off the boat with paddy for his walk. As we strolled along the towpath, there were lots and I mean lots of cyclists heading out of Worsley. So when Paddy and I got back to the boat I went out with my camera to capture the event. 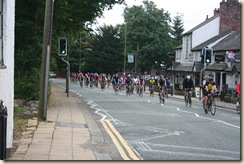 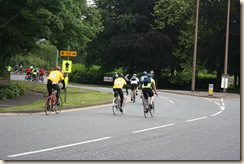 I saw a lady and gentleman stood on the side of the road and their son was waving flags at the cyclists, I thought he must have been some sort of marshal, so I crossed over the busy road trying very hard not to get mown down by the cyclists and went and asked them what was going on. It turns out that every year there is a Manchester to Blackpool Bike Ride. Most of the money raised goes to the Christie Charity, but some of the riders raise money for their own charities. The ride starts at the Manchester United Football Ground at Old Trafford, and finishes on the South Promenade at Blackpool. There was one guy riding in a Womble suit. I have a feeling he may not wear it the whole 60 miles.

Back on the boat, Keith was preparing our cooked breakfast. 9.15am the generator went on to charge the batteries and so we cold use the toaster and kettle. I do enjoy having a cooked breakfast, especially if Keith's cooking it as he usually does.

After a scrummy breakfast, I got on with cleaning the brass on the outside of the boat, it had not been done for a few days due to the weather and I had got fed up of looking at it all tarnished, so it was time to get the shiny sinks and brasso out again. Keith got on with cleaning the tiller, klaxon and chimney brass, whilst I did the rest of it. I relit the back cabin stove to finish drying our donkey jackets. The copper kettle was filled and put back on the stove for our morning coffee. 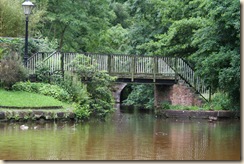 Brass done, I took myself off for a bit of a walk to photograph the Alphabet Bridge, which spans one of the entrances to Worsley Delph and is so named because it apparently takes twenty six steps to cross from one side of the canal to the other. It was said that in years gone by children used to recite the alphabet whilst crossing it. The path leading from the Alphabet Bridge passes Worsley's oldest building the Nail Makers House. 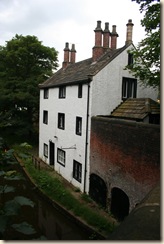 The Nail Makers House was built before 1725 originally as a house, then altered in 1789 to be used as a nailmaker’s shop. It became a reading room for villagers in 1844. 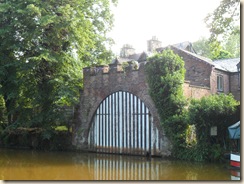 The Boat House this once housed the Royal Barge, which was specially built for Queen Victoria’s visit in 1851. The Royal Barge apparently was 45 feet long, ornamental, painted white with red and gold lining, drawn by two grey horses with liveried postilions. The Royal Barge was used again in 1869 when Prince Edward and the Princess of Wales travelled from Worsley Old Hall to Old Trafford to open the Royal Agricultural Show. More recently the boat house was converted into a house where the opera singer Russell Watson used to live. 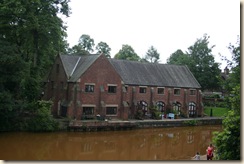 Opposite us is what used to be The Old Oil Stores and Duke's Wharf. This was where oil and other liquids were stored before being loaded onto boats on the canal at Duke’s Wharf, now as you can see it is apartments. Worsley is full of fascinating history, which I have enjoyed learning about on my walks.

As I sit and type this posting rain has begin to fall once more and so it is time to shut the boat up again against the weather. Tomorrow we will set off for Castlefield and a part of the system I have not done yet, so I am looking forward to that.

Later on the DVD collection will come out again. Last night we watched Areoplane and The Alamo, we are still working our way through the A section of our DVD collection, which over the years has grown a lot.

Today has been a lovely relaxing day, even with the brass cleaning. I have chatted to people and other boaters and watched as a camera man was filming near our boat. 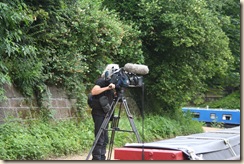 I have no idea what he is filming for and I did not like to ask.

Later on we have a Tesco food delivery coming, so fingers crossed he manages to find us, because the fridge is looking bare, but its bareness did give me a chance to give it a good clean earlier.