A day to do the Museums. 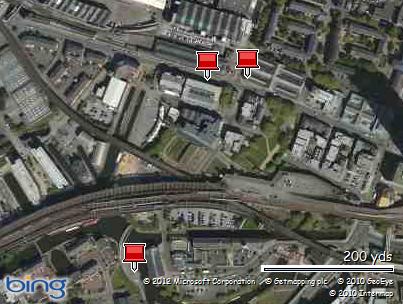 Last night the view from my galley window I thought was sublime, with the sun just beginning to set. 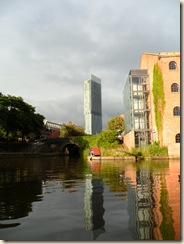 Behind the bridge is Duke's Lock and the tall glass building behind that is The Hilton Hotel, such an incredible structure for a hotel. With no TV signal, the DVD collection came out again last night we watched "All The King's Men" starring David Jason, it is one of my favourite films, we also watch "Alien Autopsy" starring Ant and Dec, which I also enjoy. With the noise of the trains, I did wonder if I would sleep, but this was not an issue for most of the night. A some unearthly hour I woke up and it was not due to the trains, but my menopause symptoms, they have been raising their ugly heads this past couple of days, and one of them is not sleeping particularly well, so I stayed awake for a while, but then finally dozed off again. 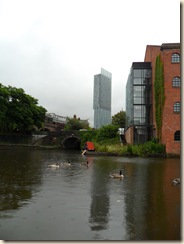 This was the view this morning as the rain steady fell yet again. I think I prefer last nights view. Paddy and I walked in the rain, so he was quick to do what he had to do and was then ready to head back to the dry of the boat. After breakfast, there did not seem much point in going into the city in the rain, so we stayed put, not only that we were waiting for a visit from Mark who works for the Canal and River's Trust, who was coming to see us about the preparations for the public launch of the trust. Mark did indeed come and see us, whilst he was out at Duke's Lock doing some work ready for Thursday. He came to let us know what our involvement would be and what was happening throughout Thursday day all of which we are invited to, so I will try and take photos if I get the chance. having sat down and had a coffee with us, Mark had to go to sort out the flooding at Hebden Bridge, where locks have been closed due to lots of debri in the canal. It was nice to meet him, after having chatted to him on the phone. Lunchtime came and went and the rain was still falling, but with us both feeling at a lose end we decided it was a good day to go and visit the Museum of Science and Industry, which is not far from the basin.

When we left the boat the volunteers were still busy clearing scrub from alongside the lock, they all looked rather wet, as the rain had been very heavy.

The Museum's site is the former Liverpool Road Station, which was the original Manchester terminus of the Liverpool & Manchester Railway. The exhibits are housed in five large buildings and is very comprehensive. The collections tell the story of Manchester's scientific and industrial past, present and future and we both found it fascinating.

The first place we visited was the Air and Space Hall. We got to discover the links between car and aircraft production in Manchester, which is huge.

There is something for every age in this exhibit.

Next we went into Great Western Warehouse.

The history of Manchester textile industy is well explained and there ware some wonder full machines to look at.

This one reminded me of one of the weaving machines at Whitchurch Silk Mill, where I worked in my youth. Also in this building was Revolution Manchester, Manchester Science, a coffee shop and shop.

Before moving on to the Power Hall and Station Building, we had a coffee and a cake, I needed to an energy boast and my feet were beginning to ache..

Power Hall first, where we saw some amazing engines.

These included some National Engines, but nothing like ours, but they were built by the same company.

The Locomotives are always a draw for us.

We then moved on to the Station Building to see the Gas Gallery.

It helps you to understand how gas is made. Built in 1817, Manchester's first gasworks stood on nearby Water Street.

It was then onward to Underground Manchester section which takes you down to the sewers. We were able to walk through a sewer built using original bricks from a Manchester sewer of the late 1830s, thankfully they did not smell.

We got to explore the history of the toilet through exhibits including a real Victorian privy. I remember my Nan having one like this down the bottom of her yard in Birmingham.

We were told that the exhibits would be closing for the day and had 15 minutes to look around the Electricity Gallery.

The exhibits allowed us to peer back in time and to see how our lives have changed.

It was interesting to see the electrics of the past and what the future holds. Time was against us, but we will definitely go back again to finish off our visit. I would say you need to allow a whole day to do it justice. I highly recommend this museum if you in Manchester.

With feet aching and a tiredness coming over me, it was time to head home to dinner and to put my feet up. Looking forward to whatever tomorrow brings.