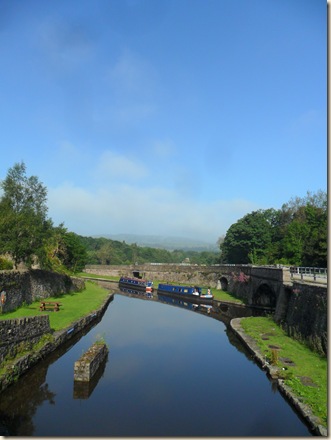 A sunny start to Saturday.

Why oh why is it when ever we add something new to the boat, something else has to play up. A couple of days ago we added a new battery to our battery bank, because of the small freezer we added earlier in the year, it now means the batteries do not get to low over night. At this time of the year it is not such an issue, but once we light the fires for the winter, the back boiler pump on the saloon stove will kick in and this will be another thing the batteries have to supply power too, so we have fitted another battery now from Kuranda in preparation for the winter. Battery fitting went fine and it is working well, but last night I put a wash on, I weighed the clothing to make sure it was not to heavy and the wash went ahead, it was not until it got to the spinning part that everything went pear shaped. The washing machine would not spin, so I had to turn the machine off, take half the washing out and try again, but still not luck, by this time the generator had been running for an hour and the batteries were charged, so I ended up wringing the washing out by hand. Now it was either the generator needed resetting, or the machines brain got scrambled, but I had soggy washing hanging in the bathroom grrrrr.

This morning we woke up to wall to wall sunshine, which is very much appreciated after the rain we have been having, even Paddy had a spring in his step when I took him out for his walk. Back on the boat we had Grapefruit, Strawberries and Banana for breakfast, before tackling the washing machine issue. The generator went on at 9.15am, as we do not like to run it to early at the weekends. Firstly we did a spin cycle with nothing in the machine and it was fine, so I added a couple of wet shirts to the drum and tried again and hey presto it worked fine, so my thought is the washing machines brain got scrambled for some strange reason, I now have my fingers crossed that it will work properly from now on, as I really do need my washing machine.

As the day wore on, I can honestly say I did very little, which makes a a nice change, I still had lunch to make, coffees to make and the usual boat chores, which for me include keeping the mountain of dog hair at bay which rolls around the saloon. I have never know a dog to moult so much and all year round, but bless him Paddy cannot help it. For dinner I was cooking sweet chilli chicken and as it was cooking in the oven a knock came on the cabin side. It was good friends Sue and Martyn from the Ellesmere Port Museum. We met them for the first time this year at the Ellesmere Port Easter do and immediately hit it off, so it was fantastic to see them both again. We sat, chatted and laughed over drinks about anything and everything, catching up on all the news from the museum. Before we knew it a good couple of ours had gone by and they needed to be on their way after a lovely day out. having said cheerio to Sue and Martyn, we had dinner and then settled down to watch "Beaches" from our DVD collection, we started watching "Ben Hur", but with us both falling asleep, we gave up part way through and went to bed. It had been a wonderful day, what with the weather and seeing friends.