River Weaver and back on to the Trent and Mersey Canal.

It was my last sleep on the River Weaver, which was sad. Having watched "Mr and Mrs Smith" on Film4, I was away to my bed, my head hit the pillow and it was then I heard the cries of a Fox in the field alongside the boat, silence was then restored and I drifted off into a lovely sleep.

6am and I woke to the sound of rain on the cabin roof, not a great start to the day, but it seems like this Summer is going to be a wet one. 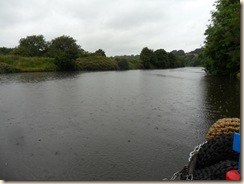 I managed to get another 40 winks before getting up to take his lordship out for his walk. It was still spotting with rain and this would be the order of the day. 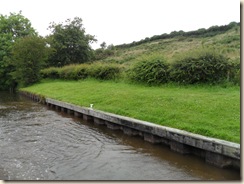 9.40am we left the very quiet mooring at Barnton and headed off towards the Anderton Lift. We passed by Roy on Gerald No13 and gave him a goodbye wave, he is staying on the Weaver until the 10th July. 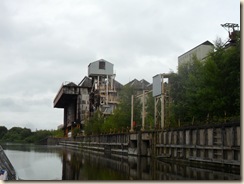 We past the industrial buildings. 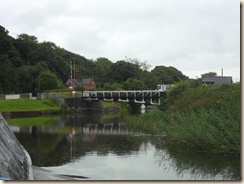 Went under Winnington Swing Bridge with the rain still falling. It was as if tears were being shed at our leaving. 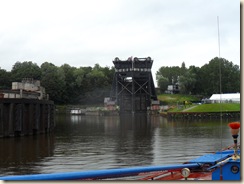 The Anderton Lift came into view. We pulled into the holding moorings to await our turn for the lift at 10.45am. 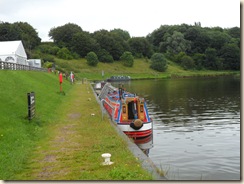 We were going up with the plastic cruiser moored in front of us. 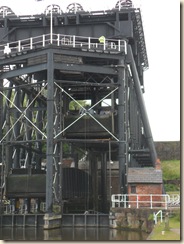 Two boats were on their way down in the lift.

Ken and his new trainee came to see us and gave us instructions on what to do. 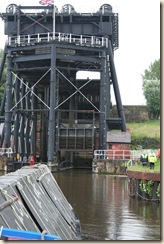 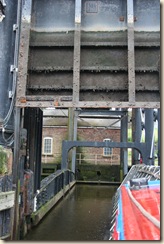 Once we were in and Ken was happy. 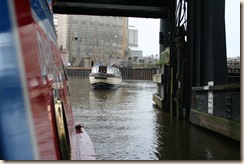 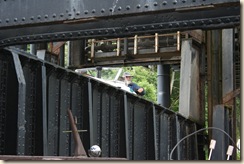 It turned out that we were the first boat to enter the lift at the bottom under the new Canals and River Trust name. A highly uninteresting fact, but never the less true. British Waterway's is no more. At 11.15am we left the lift and said cheerio to Dave who helped us on the way up in the lift. The lift staff are all so very friendly and helpful. 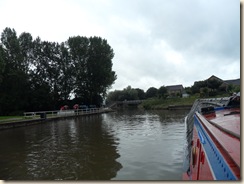 There is no left turn coming out of the lift, so we turned right and winded on the Trent and Mersey Canal, our Weaver cruise was now over and we were back into the rat race of a narrow canal. 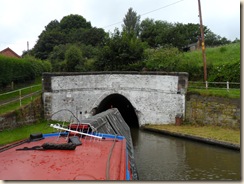 On leaving Anderton, we arrived at Barnton Tunnel (572 yards), this is not a timed tunnel, you just have to check their is no tunnel light coming from the other end.

As soon as we exited Barnton Tunnel it was only a short distance to Saltersford Tunnel, which is timed. 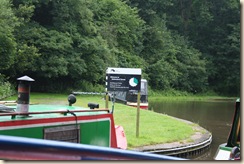 We pulled into the side and I stepped off with the centre line to wait the 5 minutes to midday behind a hire boat. 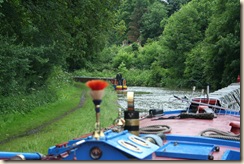 The hire boat went off in front of us and we followed them into the tunnel, leaving a decent enough gap, so as to not catch them up, well that was the general idea. 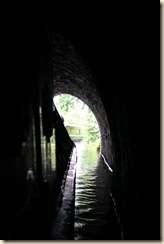 This however did not work, because no sooner we entered the tunnel, we were right up their behind. They were going so slow, that Keith had Hadar in tick over, which is not ideal in a tunnel.

On exiting the tunnel, we were right behind them for sometime and then they suddenly found the speed up button, because in no time at all they had pulled away from us and we never saw them again. 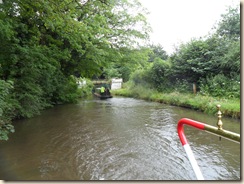 At a bridge 'ole we met a couple on a boat coming towards us, who said they read our blog, I did not see the name of their boat or their names, but thought I would post a picture anyway as we said "hello, goodbye". 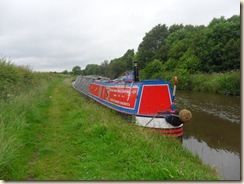 After going a short distance further, we are moored out in the countryside overlooking the River Weaver, near Bartington. We can see the river from our mooring. All moored up, it was time for lunch and a chance to get jobs done.