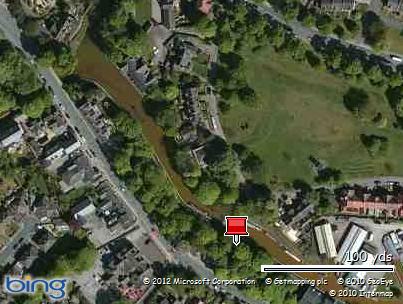 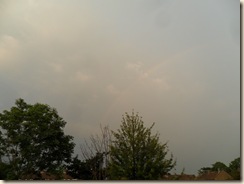 Last evening we had a taste of what today was to through at us, because first I heard thunder and then saw the lightening, along with all of this was a few spots of rain and this very faint rainbow. The sky darkened further and by 8.30pm, I had the lights on in the boat because it was so dark. 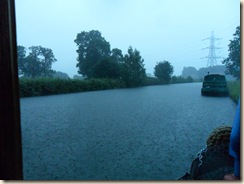 The rain just poured and poured, the surface of the water was a live. This continued until we went off to bed at 10.30pm.

This morning after an early alarm call at 6.30am. I could not hear any dancing on the roof of the boat and it looked promising when I took Paddy for his walk, but that was to be short lived, because as we left the Dunham Massey mooring at 7.30am, there were a few spots of rain sprinkling on the canal. 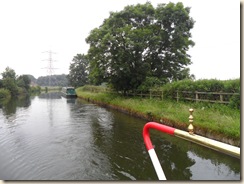 The sky was full of the wet stuff with very low cloud, just as well we had both put on our full wet gear. 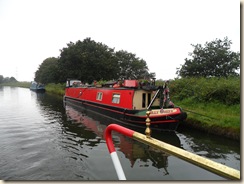 Just after the River Bollin Aqueduct, we passed NB Hobo, who had been in front of us at the Middlewich Festival and NB Billy Whizz, Ray opened a side door and said "Morning", I suspect Tracey was still in bed. 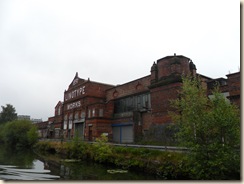 The countryside was now disappearing as we were getting closer to Sale. At Broadheath there were many industrial buildings, many of them new but one of the few remaining old buildings is the Victorian Linotype Factory, dated 1897. 1889 The Linotype Co was formed by the publisher Joseph Lawrence, founder of the Railway Magazine. 1895 Lawrence became chairman of the Linotype Co and remained as such until his death in 1919. So many of the old buildings have been raised to the ground it is wonderful to see one still standing. 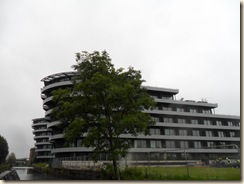 Alongside the factory is this ultra modern apartment block, which I think was being started when we were up here in 2005 on our other boat.

Through Sale the rain just did not give in. 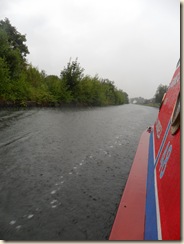 We passed lots of moored boats on the Sale Cruising Club at Timperley and Brooklands. 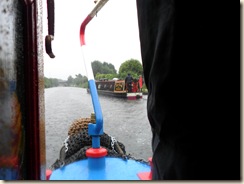 Whilst I took shelter in the back cabin another brave boater was on the move. 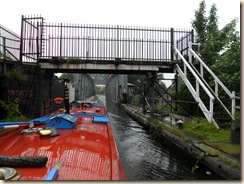 Whilst Keith was visiting the smallest room on the boat, I began steering Hadar across the Barton Swing Aqueduct. 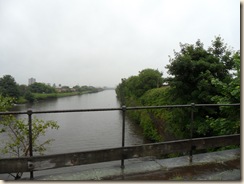 No sign of anything moving on the Manchester Ship Canal and I cannot say I blame them. 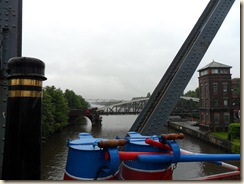 We would not have bothered moving, but now we have a change of plan for the next week, so had to move. Not only that you only have 7 days on the Bridgewater Canal, then you must get off of it, so we had to move. I have also done a Tesco food order for Sunday at Worsley, because the fridge and cupboard are looking rather empty.

On the site of the Worsley Cruising Club moorings, I saw an old friend. 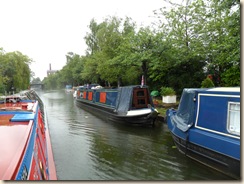 Misty Lady was our previous boat. We lived on her whilst Hadar was being built. I knew she was up here, because having been sold by the person who we sold her too, she now has another new owner. 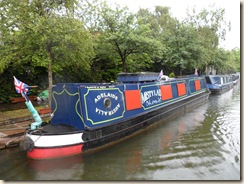 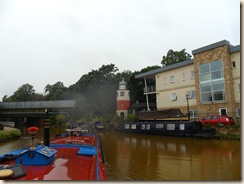 At Parrin Lane Bridge, Monton is this brilliant lighthouse. You can also see that the water is tinted by iron ore from nearby mines. 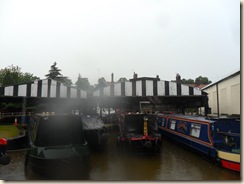 We were now in Worsley passing the dry docks. 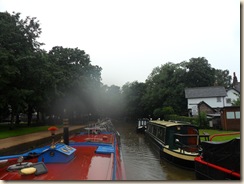 Just after this photograph, we moored up on the last remaining mooring phew. Our donkey jackets were so wet we could wring the water out of them. I think I am going to be spending the rest of the day drying out, as it is throwing down again. I have a feeling there will be flooding over the next couple of days, just hope it does not involve Worsley.

Where ever you are stay safe.