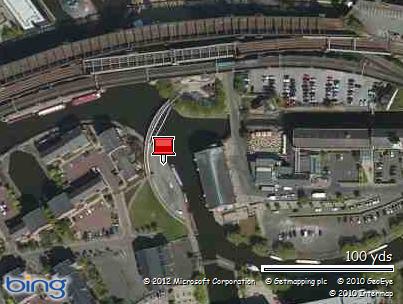 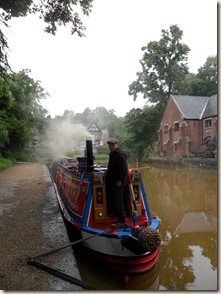 In yesterday's posting I said it had begun to rain whilst I was typing. Well that did not really stop, even whilst we waited for our Tesco man to deliver our food order, the rain was spit, spotting. As the evening wore on it got heavier, which continued throughout the night. I know it was raining throughout the night, because I was awake.

It was moving day, and yep it was still raining when I took Paddy for his walk. It was that drizzly stuff, that gets you wetter than proper rain. So the back stove was relit, so that we could dry out any wet clothing at the end of the journey and then we were ready for the off. 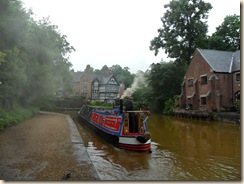 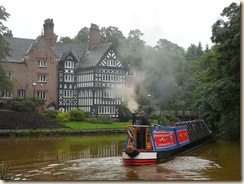 Keith winded the boat whilst I snapped away. 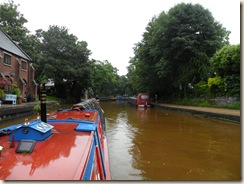 I then stepped back on to the boat in the bridge 'ole. It was time to say cheerio to Worsley for another year. 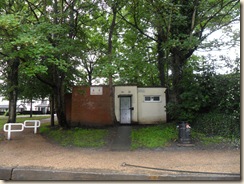 For anyone wanting to use the public toilets, they are not open to the public anymore, but boaters can get into them sing their Canal & River Trust key (BW key). It has elsan disposal and a water tap. There is no bins for rubbish, so consequently all the litter bins are full with rubbish, much of it looks like boaters rubbish. Maybe the council should put in proper boaters bins? 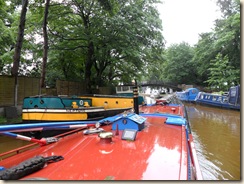 I really did enjoy my stay in Worsley, it was nice to see the changes and things which are being built, I dare say when we come this way again we will see yet more changes. 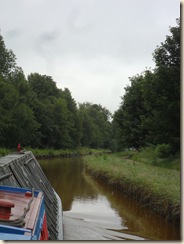 We were off out into the countryside. 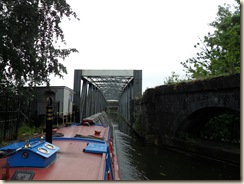 Back over the Barton Swing Aqueduct. It is the first and only swing aqueduct in the world and is thus grade II listed. It was designed by Sir Edward Leader Williams and built by Andrew Handyside of Derby, the swing bridge opened in 1894 and remains in regular use. 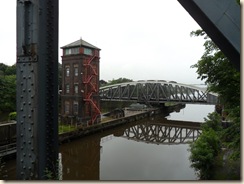 One of these days we will be here when the bridge is opened. It is such an amazing feat of engineering. 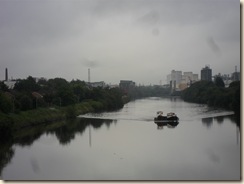 There was a tug coming along the ship canal, but it was not big enough to have the bridge open grrrrrrrr. 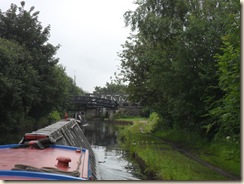 At Waters Meeting, we turned left and headed into Manchester. All of this now new water to us, which was very exciting. 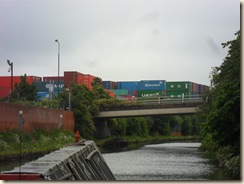 The towers of containers reminded me of Felixstowe docks, but of course we are no where near there, these have come off of the Manchester Ship Canal, or maybe they will be heading on to the Ship Canal. 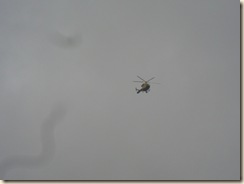 There was an eye in the sky looking out for something or someone. 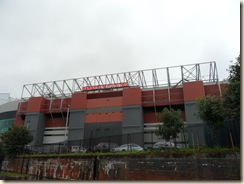 We passed by Old Trafford, the home of Manchester United Football, wow it is such an imposing stadium. Made me want to be there on match day, not that I support any particular team. But I would love to go and see a football match. 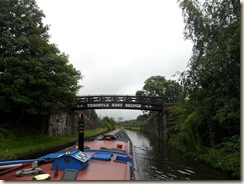 We pasted under Throstle Nest Bridge. 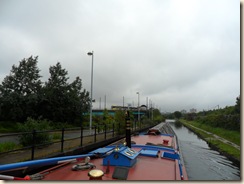 We got glimpses of the Manchester Ship Canal, which is towered over by the Metro. 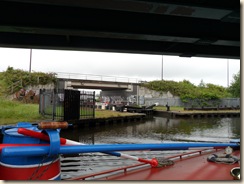 Pomono Lock, takes you down on to the ship canal. 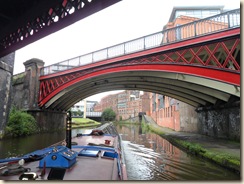 We were now entering Castlefield and its stunning bridges and canal basins. 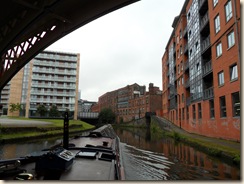 I found it really quite exciting, as this is my first time in Manchester ever. 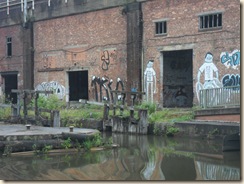 The remains of Hulme Lock, which was the original junction with the ship canal. 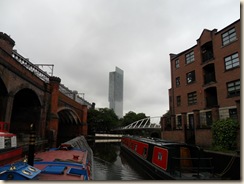 We had reached the Castlefield Junction, which has railway line, amazing bridges and old warehouses. 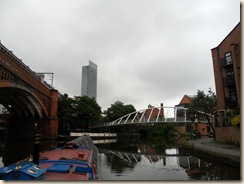 Mooring was going to be a problem we thought as it was very busy, but NB Kelly's owner Richard, who Keith knows from the Boats and Canals Forum, was about to head off and offered us his space, so we breasted up with them for a natter. They left and we pulled into the mooring. 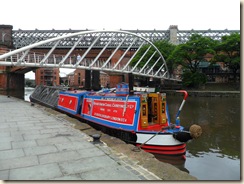 I feel a wander coming on, as I am eager to explore.