Fun and games on the Marple Flight.

The weather forecaster could not have got the weather more wrong for us today. They said it was going to be very heavy rain all morning until around 3pm, so when we woke up at 5.30am and there was no rain we thought should we move. After a cup of tea in bed, we came to the conclusion that we should go for it. So having had breakfast, walked Paddy and got the boat ready we set off from the bottom of the Marple flight at 7.25am. 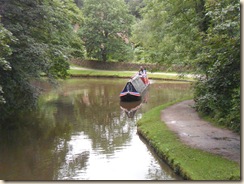 I walked up and set the first lock, whilst Keith moved the boat. 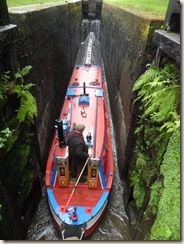 So far so good, even though we had drizzly rain. 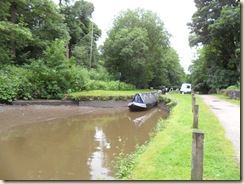 The first pound was so low having filled the lock, so I had to walk up to lock 2 to let water down. This problem continued all the way up to lock 4. 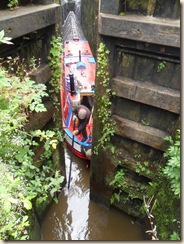 Got through 5 ok, then got into lock 6 and I could not shut the gates, so Keith rummaged around with our newly found pole again to see if he could move the obstruction. After some minutes and some flushing of the canal, I finally managed to get the gates shut and we were on our way once more. 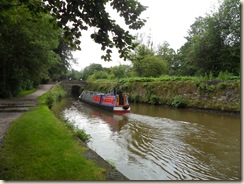 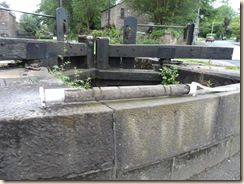 Got to lock 9, where there is a lovely old roller on the wall. This roller on the parapet of Brabyns Bridge, next to Lock 9, eased the movement of tow ropes and prevented the ropes eroding grooves into the stonework. 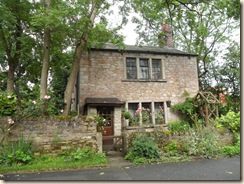 There is also a very sweet lock cottage above lock 9. Whilst Keith closed the gates, I walked up to the next lock and got it ready. 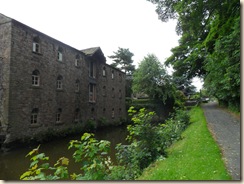 Below the lock is Samuel Oldknow's Warehouse, which has been converted into offices. Samuel Oldknow, a local textile manufacturer and industrialist, had this warehouse built around 1801. The warehouse had a loading arm going inside for easier trans-shipment of goods. 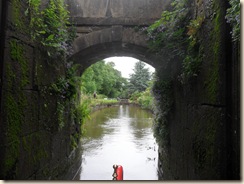 It was onward and upward until we reached lock 12 and the sun was now shining. 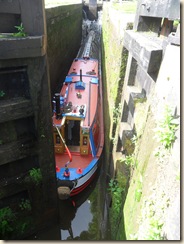 We got into lock 12 at 10am, having waited for a boat to exit the lock coming down, they were the first boat we had seen all morning. Having got into the lock we immediately knew there was a problem, because I could not get one of the gates to close properly. Once again Keith prodded around with the pole and even though he could feel something in between the gates, he could not move the obstacle. I was joined on the lock wall by Andrew a young man who likes to come down to the locks and help boats through, he even has his own windlass. He has just finished school and does not start college until September so is looking for something to do, so I suggested he join the Canal and River Trust volunteers. After 15 minutes of trying and 3 boats now queuing behind us, we rang Canal and River Trust, who by 11am sent out Mark and Terry to assist us. 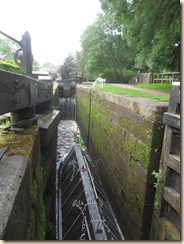 Terry climbed down the lock ladder and on to our bow, with our kebb he tried to fish the obstacle and only succeeded in breaking our kebb. So we thought we would have to buy another one. 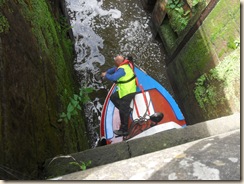 Like Keith, Terry could feel the problem, but could not shift it, so I sent down the grappling hook and with with Terry's instruction, I managed to pull out one of the obstacles. 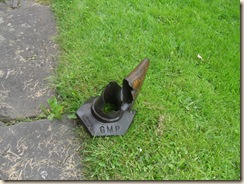 Yep it was a flippen road cone grrr. Terry then went on to move something else which was also causing a problem, but we never did get to see it, as he only managed to move it. Jobs a good un between Terry, Mark and I we had sorted the problem and now we just had to wait for the C&RT guys to send down some water, because the pound was almost empty. Whilst we waited Lesley and Ray on NB Morgana Le Fey, who rescued the hire boat yesterday came and said "Hello". It is always nice meeting fellow bloggers. After I had left them yesterday the hire boat did get stuck again on the mud and they had to rescue him again. It turned out that they had a fouled prop and so Ray cleared that for them, which improved their hire boats performance. I am sure we will see Lesley and Ray again whilst on the Peak Forest Canal. 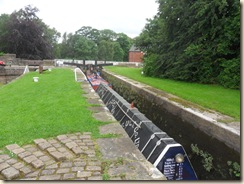 Water level finally up enough for us to move into lock 13. Andrew walked ahead and helped with the gates at lock 14, he then said "Cheerio" and walked down the locks to help the now 4 boats waiting to come up, but was told by Terry that he could not help out unless he is a volunteer, which is such a shame, because he clearly loves the canals and has been happily helping boats for sometime. I hope this does not put him off from helping in the future. 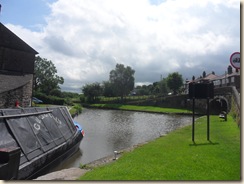 At 12.35pm we finally made it to lock 16 and the Canal and River Trust yard and junction, we were turning left on to the Upper Peak Forest Canal, to our right was the Macclesfield Canal. 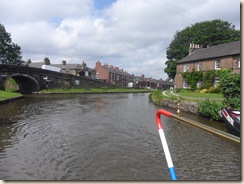 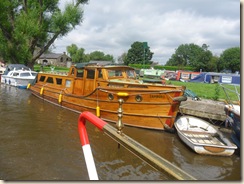 We passed one of my favourite wooden boats. It is such a beauty. 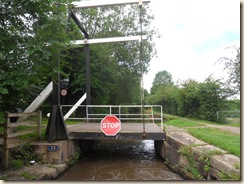 I then had the two lift bridges and one swing bridge to do and whilst doing that I made us some lunch, I was absolutely starving and parched. 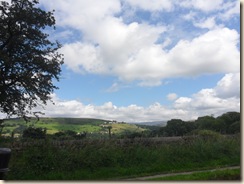 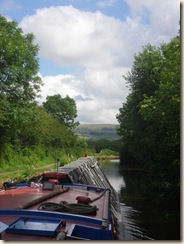 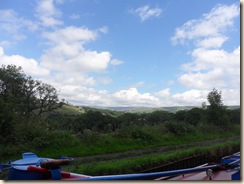 There are some stunning views of the Pennines and on such a lovely day the hills were bathed in sunshine, there was no sign of the heavy rain which was forecast. 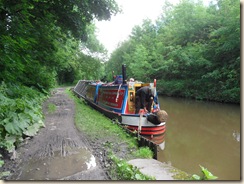 We finally moored up just before New Mills at 2.15pm after an eventful morning.

It is now almost 4pm and the sun is still out. Paddy is lying on the back counter enjoy the sun and Marmite is soaking up the rays on the roof. I have a feeling I am going to sleep well tonight. We have a TV signal yayyy. Last night we watched the last of the DVD selection in A, which was "Australia".

Tomorrow we are heading for Bugsworth Basin.