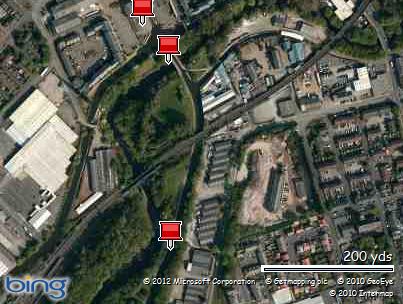 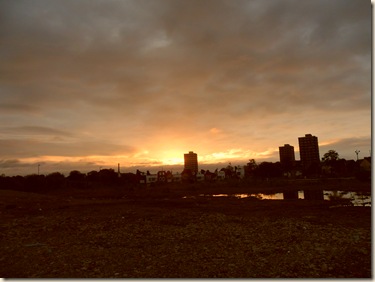 Last nights sunset near the marina. 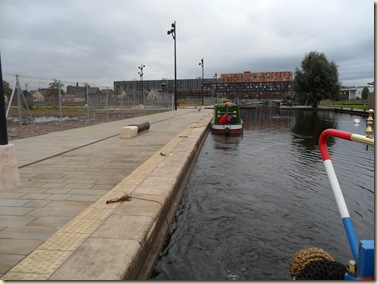 We left New Islington Marina at 6am after a 5am alarm call. 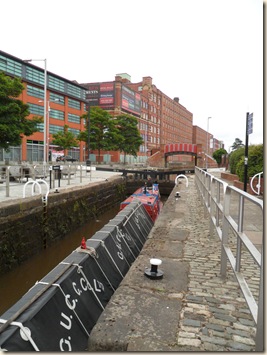 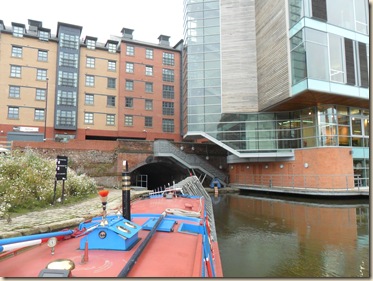 We came down two of the Rochdale Locks to turn on to the Ashton Canal at Ducie Street Junction at 6.30am. 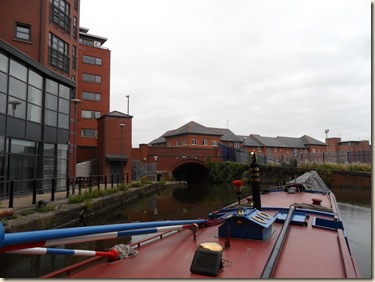 This part of the Ashton Canal is a densely built up area, with lots of new apartments. 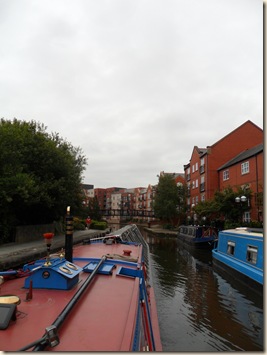 We cruised through Piccadilly Village, which was built in 1990. 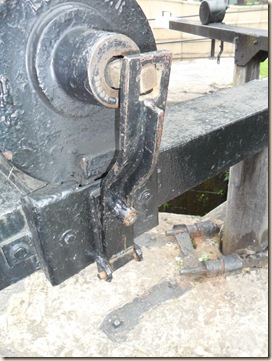 I then started to work the first of the 18 locks in this section. All the locks have these locks on them, which a use the same key as is used for the handcuff locks, they are a bit of a pain to unlock and lock up again, but after the first couple of locks, we had company behind us. NB Sometime had left an over night mooring at Ducie Street and were following us up the flight, so I left the locks unlocked for them and they then locked them back up. 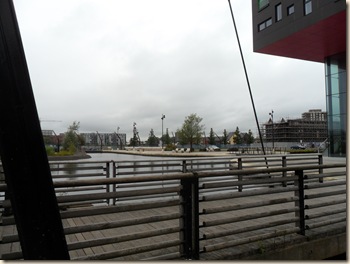 Cruised past the Ashton side of the New Islington Marina, which does not connect up due to a road going through it. 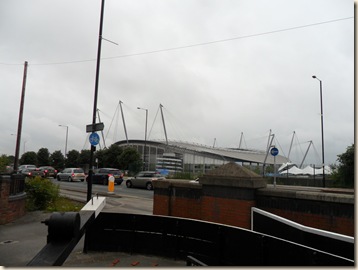 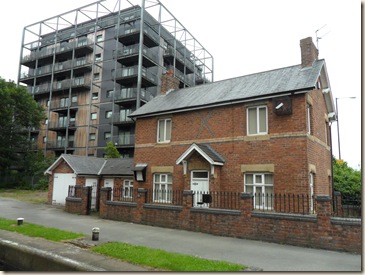 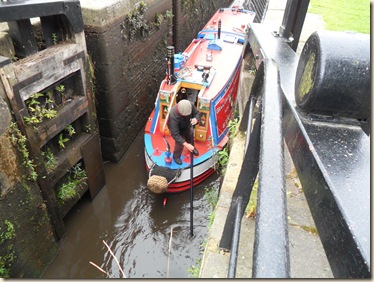 At lock 13 the boat pole we had found on our way up came in handy. I could not get the gate to shut properly and even with Keith trying to flush the obstacle off of the cill, he ended up using the pole to give the offending item one last shove. We never did see what it was, but the pole did the trick. Drizzly rain was falling on and off, I actually found it quite refreshing. 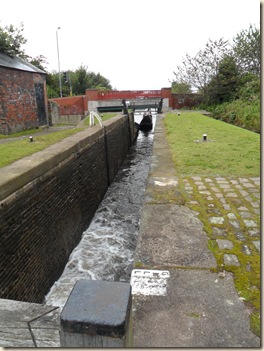 A couple of the pounds had been on the low side, so when it came to the pound between locks 15 and 16, I told Keith if he was struggling, to give a blast on the klaxon and I would send some water down. Keith did indeed give the klaxon a wind and I had to send down a fair amount of water, so that he could make it into the lock. We passed by Grimshaws Swing Bridge which was open, I then had to step off the boat to open the Clockhouse Swing Bridge, whilst I closed the bridge Keith carried on to the last two locks of the day phew. 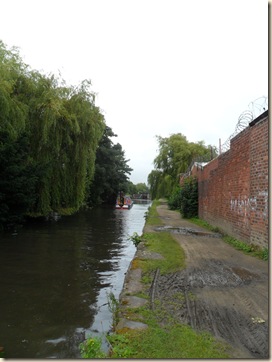 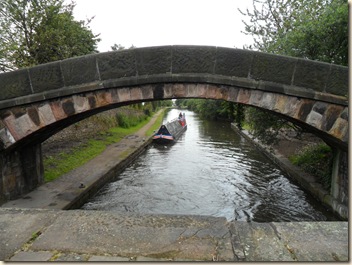 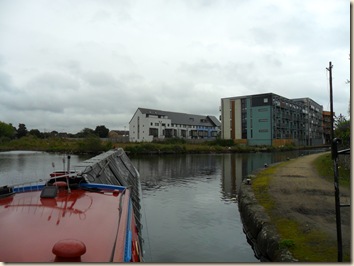 We left the Fairfield Locks thanking the crew on NB Sometime for all their help, they were a lovely family who were heading for the top of the Marple Flight. Not long afterwards we had to pull in due to something on the prop. 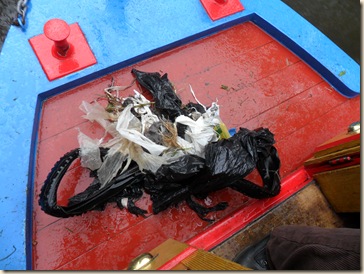 The rubbish included a bike tyre. As I stood on the towpath holding the centre line around my waist, NB Sometime over took us waving as they went past. After some 15 minutes we were on our way in what was now actual rain. 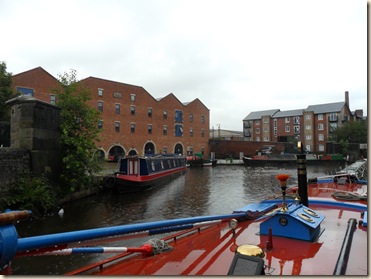 We past a section of the Ashton Canal that Keith worked on in the 1970's when he and 999 others set about cleaning out the canal, the event was called Ashtac. We tried unsuccessfully to moor just past Dukinfield junction where our friends David and Elaine are moored on their boat Patience. 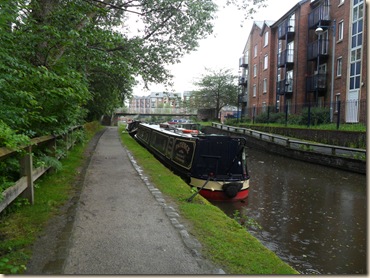 We would have been over 3ft away from the bank, which would have been no good to Paddy and I was not looking forward to making the leap in the wet, so I stayed ashore and Keith carried on to wind at Whiteland's basin just before the start of the Huddersfield narrow canal. It really is getting quite desperate on some of our canals that the depth is so shallow, dredging is now becoming a priority and one would hope that the new Canal and River Trust will make an effort to sort the shallow canals out. Whilst Keith was away winding, I stood and had a quick natter with Elaine and David, with the rain lashing it down. I was now soaked through to the sink, but at least it was not cold. 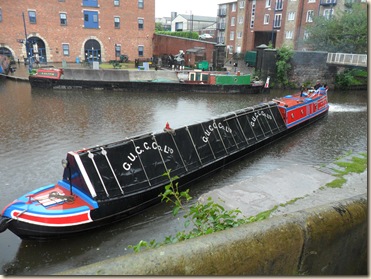 Keith arrived back at 1.pm, I was concerned that he may get stuck whilst winding, but he said it was not a problem even thought it was shallow, he picked me up at the junction and we turned into the Peak Forest Canal. 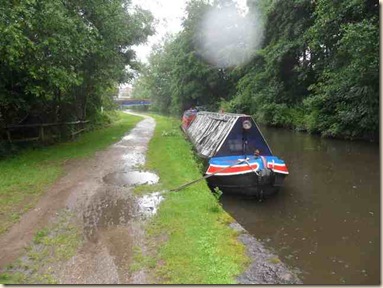 We finally moored up at 1.15pm, soaked but still smiling. I had to change all of my clothes, I know to much information, but I really was soaked. It has been a long day in many ways and the locks although not difficult to do are a bit of a slog.

I made us a late lunch which we had with coffee whilst we dried out. The rain finally stopped and it looked like it was going to brighten up, so we locked the boat up and walked back to see Elaine and David on NB Patience. We enjoyed a coffee and a really good catch up on our Summer cruising, which I say loosely because we have yet to see a proper Summer, but as I remind people this is Britain. It was fantastic to chat with them again, they have become such wonderful friends over the years and we always enjoy seeing them. After a wonderful couple of hours, we said "Cheerio" to Elaine and David, and just as we set off back to the boat, the rain began to fall again. I am really glad we are not on a river at the moment. One of the discussions we had was about how shallow the Huddersfield Narrow Canal is, Elaine and David really did struggle, so at 2"6' we would stand no chance of getting up there which is a real shame.

Back on board our boat, dinner is now cooking and a Rubarb pie is also baking for pudding, which will be enjoyed with Ice Cream. The TV is on, so all is good in my world right now.