I went to bed last night at 9.30 pm, mainly because I was tired, but also I could not sit and watch the TV any longer because my mind was not switching off. Being on my own with my thoughts, gives me way to much time to think about what has been happening over the past few weeks. I think to be honest I could get depressed if I allowed myself too, but that would get neither myself or Keith anywhere, because he needs me to be strong for him, because I am his voice. Because of all the drugs Keith has had pumped into his body, he is finding it hard to remember anything, which means even of he is told things by the doctors, physio’s and nurses, he does not remember it all. So I am his eyes, ears and voice, when I get the chance, this comes with issues, because my brain does not shut down when I get home and therefore sleeping is sometimes a major problem. Last night as I said I went to bed at 9.30 pm, all snugged down in the back cabin with the stove still toasty warm. Marmite was curled up on Keith’s side of the bed, so I did not have the heart to disturb her.

I woke up at 12.10 am, which was not ideal, so I turned over, snuggled back down beneath the duvet and slept till 4.45 am. Marmite had disappeared from Keith’s side of the bed, she was in the galley looking through the porthole, probably watching for anything walking past. Laying awake, I listened to the Blackbird and Thrush belting out their dawn chorus above the sound of traffic on the road. There is something so comforting about listening to the dawn chorus, although I would have wished to have slept a bit longer. 5 am I got up got the back cabin stove going, as it was on its last legs and then made myself a cup of tea. Paddy was still snoozing, but Marmite was up to speaking to me. If only I knew what she was saying.

6 am with no further chance of me going back to sleep, I was up and dressed. The bed was rolled up and stowed away in the back cabin bed ‘ole and it was time to get on with the morning’s chores. Fire’s done, Paddy walked done, Animals fed done, my breakfast eaten, everything laid out for the days visit to the hospital done. I now get so ahead of the game, my routine is like a finely tuned engine.

I left the boat and headed off to the hospital, not sure what I would find today.

Last night Keith had a temperature, the shakes and then hot flushes, plus pain, so they got him extra blankets and more pain medication.

When I got there this morning he was sat in the chair with a pained expression on his face and feeling sick. He was not drinking either his water or protein drink due to the sickness feeling. He really wanted to go back to bed, but before going back to bed the Physio's walked him down the corridor which he managed very well, even though he was a bit wobbly on his pins. I think they had a job to keep up with him. I requested a visit from the doctor, so I could get answers to many questions, which have been keeping my mind racing, when I am supposed to be sleeping. That happened after lunch and I had my mind put at rest. They will not re-open him up unless they absolutely have to because of further infection, which was music to our ears. After the registrar had gone Keith was much more his old self and got up again. I walked him to the bathroom and gave him a spruce up and finally he got rid of the hospital gown and got into some snazzy hospital PJ's. 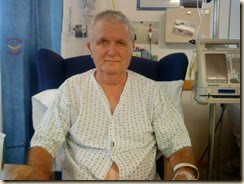 Although it has to be said the top was a little tight. From speaking to a couple of the registrar's it seems that Keith is having a CT scan next week, to see what is going on. He will have a dye put down him to show up if there is a further perforation going on or if the drain has moved, either of these could be causing him pain and the continued infection. If it is another perforation that could explain his temperature and shaking again, but positive thoughts we hope it is not that. He is still on the antibiotics for a few more days and still no eating. So all in all a good day. Keith sends you his best wishes. 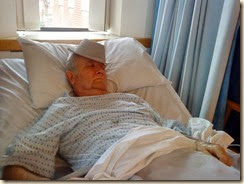 Yes he really was wearing the sick bowl. He is beginning to get his sense of humour back which is lovely to see.

Back at the boat now and it is raining again, what a delight. I am going to have dinner, walk the dog and then settle in for the night. I hope Keith has a better night tonight.