To much to bare.

When I arrived at the hospital Keith was sat in a chair by his bed and the look on his face said it all. He was in such a lot of pain. The problem is the physios want him to sit out, so he does not get a chest infection, but he is still in so much pain and pressure, he finds it hard to sit. he asked to go back to bed and they did allow it under protest. Keith went back to sleep for a while and mumbled when he was awake enough to chat to me. I find it so hard to see him in pain and the fact that they cannot control it still. He had at least eaten 3 spoons of Weetabix and was drinking water.
I stayed with him until 1.30 pm, as he was waiting for some lunch, he only fancied a cuppa soup, so I went off to have some lunch in the day room. I was allowed back into see him at 2.30 pm. He was once again sat out in the chair and he said the pain was so bad. But they insisted he sit out until at least 3 pm. In the end he was feeling so sick, they put him back in bed at 3.15 pm. The Nutritionist came to see him to check on his weight and to give him a protein drink. She is going to keep a close eye on him. Later in the afternoon the ICU outreach nurse came to see Keith and she checked his chest and his wound. She looked a little concerned, but did not give me any idea as to how he was doing, so I asked to see his surgeon. I have to wait for an appointment to do that, which I find stupid. I have not seen anyone who can tell me what going on since last Thursday and I know they are busy, but I want to know why he is still suffering a week on after his surgery.
I came away from him at 3.30 pm as he was sleeping and peaceful and I did not want him to see how upset I was. I came back to the boat so upset and really needed a hug from my dear man.

Keith say's "Hello". He asked me to take this photograph and to say thank you for all your messages of support. Today has been a better day. Good and not so good news. 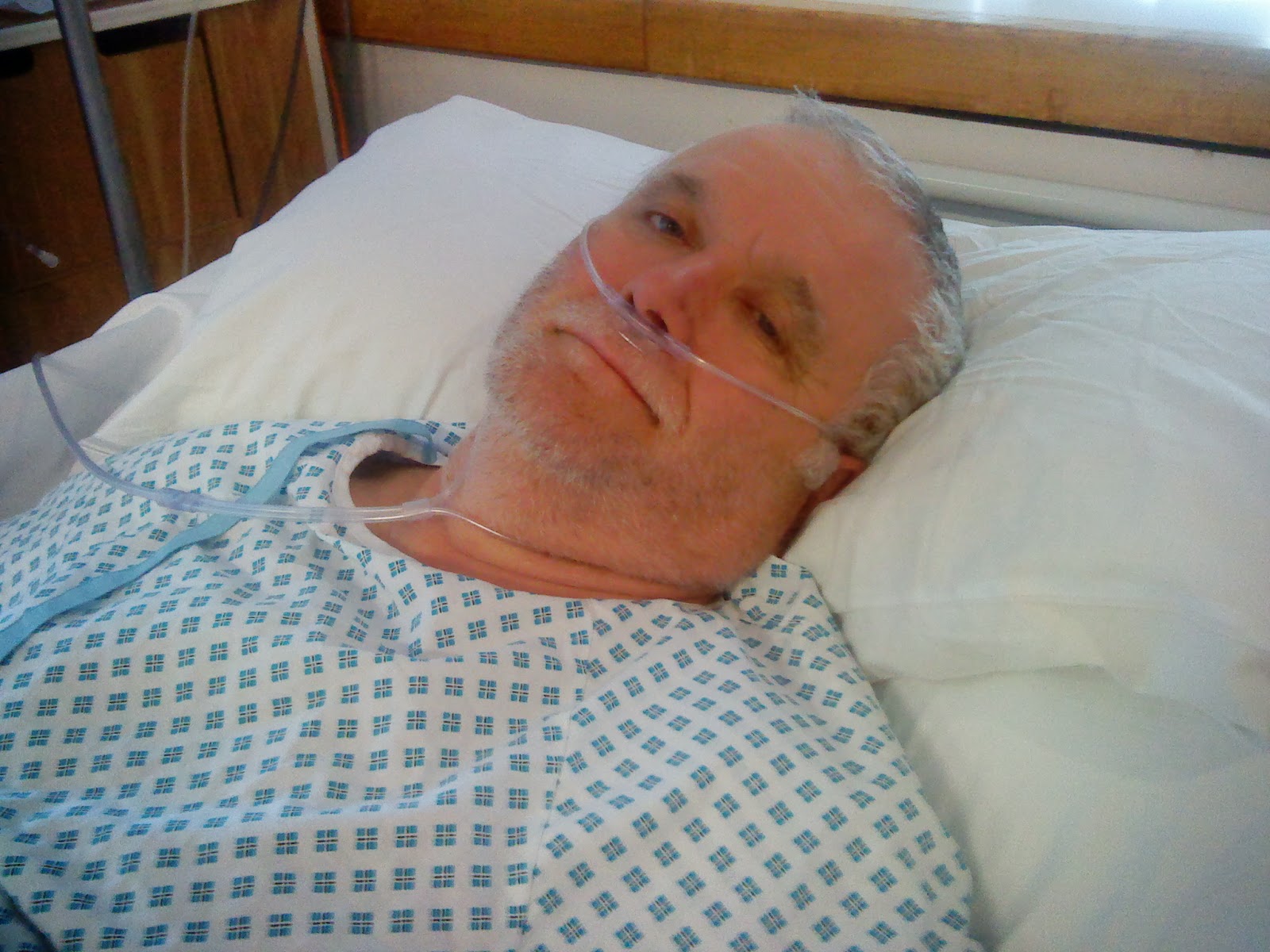 So I will go with the good news first. Keith was much better in himself today and the pain has been controlled today yayyy. He had sat up for an hour this morning, but was very sick from what he had yesterday lunch time, so they put him back to bed. He was much more chatty and even smiled and joked, which was a huge improvement as the photo shows. After lunch they got him up and he walked a few steps but felt very dizzy, so they put him back to bed. I spoke to his physios and they have agreed to take things a lot slower with him and go with what he wants. He wanted to sit in the chair this morning, but it proved to much. The surgeon came to see me and check on Keith this afternoon. He was furious because the Pharmacist had stopped Keith's antibiotics. In his file I notice a note from her saying" The IV is unlicensed and must be stopped immediately". No idea what that meant, but the surgeon was not happy, especially as Keith's white cell count had jumped up by a lot. So he is back on two antibiotics. The surgeon said it will be for at least another two weeks on the IV antibiotics. He is concerned there is still infection in there and will be seeing Keith again Thursday. He was checked over and his stomach was listened to for bowel sounds and the decision was taken, he cannot eat again at the moment and can only have sips of water because his bowel is sleepy. So good news he is happier in himself but not so good news he still has infection in there somewhere. The surgeon was very helpful and answered all my questions. As for me I am also happier now I know what is going on. xxxxxxx