Didn’t we have a lovely time…….

Last night we hd the most incredible sunset over the River Mersey. 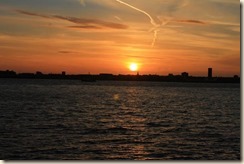 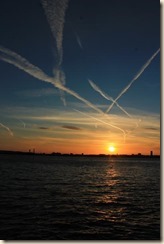 It really was amazing.

We woke to a lovely sunny morning and so we were going to jump on a train and visit Crosby Beach. But before setting off, all the usual boat stuff had to be done. Paddy got his walk around Albert Dock and then he and Marmite got fed. Marmite decided she dis not want all her breakfast and projectile vomited it across the worktop. Her aim was pretty good because some of it landed in Keith’s cereal bowl, so I had to redo his breakfast. (Sorry if you were eating when you read that bit). I made us a packed lunch and two bottle of squash to take on our trip, which would be eaten somewhere on the beach.

We left the boat and just as we headed off to catch the train my phone rang. It was BBC Coventry and Warwickshire and they wanted me to help with Vic Minettes phone-in on whether dogs should be on leads at all times, after a dog was attacked and killed in Wyken. I did my piece on the radio and we then set off to the Liverpool Central railways station. 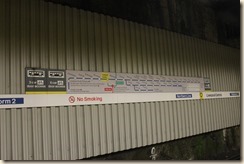 We caught the Mersey Rail train to Brundellsands and Crosby. Having stepped off the train we walked about half a mile, to the beach to see the Anthony Gormley statues. 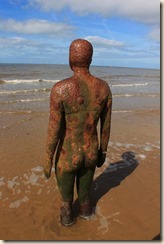 They are well worth visiting and very thought prevoking. It was about 15 minutes after high tide when we got to the beach so we gradually saw the further statues emerge from the sea. 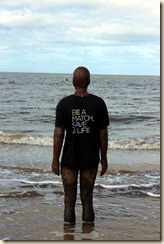 Someone has obviously thought this statue needed a T-shirt to keep it warm! 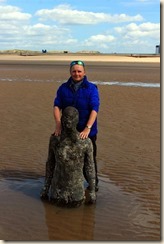 I bet he is cold around his neather region. 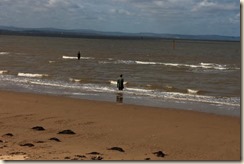 It has been a while since we last saw waves on a seashore. Keith took his marine VHF portable radio with us so we could hear the various ships calling as they left the Port of Liverpool on the falling tide.

We had a cup of tea in the Crosby Leisure Centre, over looking the swimming pool. We were watching a small child refusing most adamantly to go into the water. He was not happy to have his 1 to 1 swimming lesson and nothing was getting him in the water. After a nice cuppa, we continued our walk along the beach and found somewhere for our picnic lunch. The sand dunes, seemed like the nicest place out of the breeze.  Before leaving we had the obligatory ice cream on the beach

. The only thing we did not do was go for a paddle.

Back in Liverpool after our train journey home, the Villarreal football team coach was parked outside the Hilton Hotel. They play Liverpool tomorrow night. 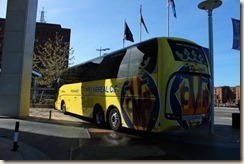 A splendid day was had by us both and I have caught the sun.