Sunday morning and it was definitely a early morning that is best forgotten.

At stupid o’clock around 2 am we were awoken by sirens going off and Paddy barking. Paddy hates the emergency service sirens, they affect his hearing poor boy. The sirens were going off and it was probably all to do with the late night revellers who seemed determined to keep us from sleeping, because we were still awake gone 4 am and so I made us a cuppa and we sat in bed and listened to the mayhem. This was definitely the downside to the docks.

On the plus side, once we had gotten  little sleep we woke to peace and quite, well all most. The Seagulls were calling, making me think of the beach and waves crashing on the shore. It was raining, which lasted most of the day. Paddy got his walk in the rain, we walked down to Pier Head to see if the cruise ship had come in and low and behold there she was in all her glory. Due to the rain I did not take my camera, but thought we could go back later in the day which we did.

In the meantime back on the boat, I got on with doing a wash and then baking a cake, whilst Keith went off to the EE shop to get us a Osprey Mini Wifi device to replace our dongles.

Instead of the 2 gig each, we now have 16 Gig between us.

After lunch friends Christine and Steve who own NB AmyJo (CLICK) came and paid us a visit and later on their daughter Jo joined us. We had a wonderful afternoon drinking tea and eating cake, whilst we put the world and his wife right and of course chatted about boating. No toilets were mentioned.

After our friends had left us, it was time to feed mog and dog and then take Paddy for his walk. I suggested we take Paddy out for a stroll along the river front to see the Caribbean Princess, which had birthed here yesterday. 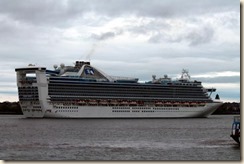 It was fortunate that we did walk down to see here because we were treated to excellent views of her as she left her birth and turned in the river to head off to her next port of call. She had come to Liverpool from Bermuda. 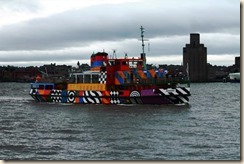 The Mersey ferry was also coming in to dock at the end of her day. We also saw the Isle of Man ferry dock, allowing its passangers and vehicles to depart and then the next lot to get on board. A real treat for us to watch.

Back on board Keith connected us up to the new Oyster Mini Wifi, having charged it up and we are good to go.

I am seriously hoping we get some sleep tonight.