Having had a wonderfully peaceful night in Froghall Basin, today we planned to go to Kingsley & Froghall Railway Station. 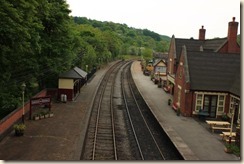 It was all quiet at the station. I had heard a train hooting at around 9 am, but it had gone to Cheddleton. With nothing else to do with our time we decided to hang around, as we had been told that trainee drivers were on board, so it was likely the engine would be back.

Whilst we waited, it was a good opportunity to take photographs. 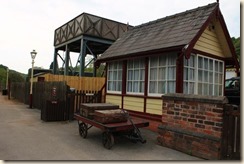 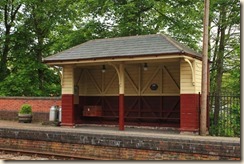 Kingsley and Froghall railway station is a former railway station of the North Staffordshire Railway (NSR) that is now a preserved station on the Churnet Valley Railway in Staffordshire, England. It was originally opened to both passengers and goods on 1 September 1849. Like with many UK railways, passenger numbers in the 1960s decreased to such an extent that the station was closed to both passengers and goods in 1965. In the 1970s a railway preservation base was set up at nearby Cheddleton station. This was later to become the base of the Churnet Valley Railway (CVR).  The station was rebuilt and reopened by Pete Waterman in 2003. It has been done so lovingly you would have thought it had been here for centuries.

We waited and we waited, until we got thirsty, so went and had a coffee in the station tea room. Mugs of tea and coffee £2.50 and very nice it was too. 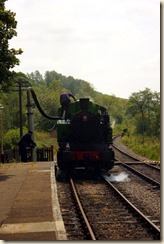 The wait was over at 11.35 am when the green machine! Polish Loco TKh49 No.2944 'Hotspur' arrived. She took on water before moving into position to hitch up the carriages for her first trip of the day. 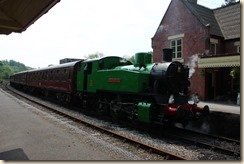 She left the station at 11.55 am and we decided we were going to go on the next trip, which was due in at 1 pm, so instead of walking back to the boat, we went to the tea room for lunch, Keith had a bacon and cheese oatcake and I had a sausage bap and then we waited for ‘Hotspur’ to come back in. 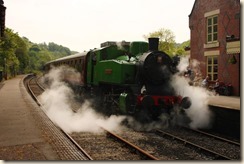 There is something so majestic about steam, I absolutely love it as does Keith. 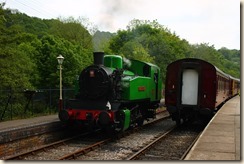 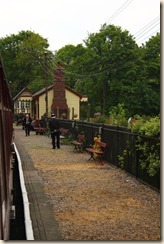 We had a short stop at Consall Forge Station, before passing the Black Lion Pub. 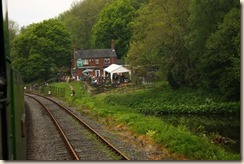 Passed Cheddleton Station and terminated at Leek Brook, which is as far as it goes at present. 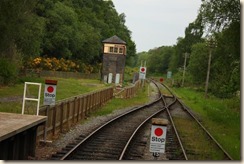 It was a wonderful trip. 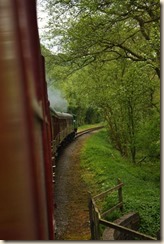 The views across the valley are stunning and the trip is so worth doing. It took up most of our day being at the station, but we both had a fantastic time.