Walk down to the River Weaver.

Being the weekend we do not move unless we have too, so it was a chance to relax and enjoy the weather. Before I go on I remembered something funny from yesterday (Friday). I love looking at gardens and what the owners have done with them. Yesterday I got more than I bargained for when looking at a beautiful garden. There was a naked man walking around his garden and conservatory. I had to look again because I did not believe my eyes, but on the second look yep the man was naked, well apart from socks and shoes. I thought I had seen everything, but obviously this was a first for me whilst cruising the system.

Ok back to the weekend and a chance to relax.

We had the most peaceful night of the whole trip so far. There was not a sound to be heard when I lay in bed last night. Marmite was feeling the chill, so she settled down on my for the night. I fell asleep, so I have no idea how long she stayed snuggled on me, but she was not there when I woke at 6.45 am.

I made us the usual morning brew and we sat in bed listening to the radio and planning the day. Marmite crept beneath the duvet for a warm. I have never known a cat that feels the chill like her.

After breakfast, we set off for a stroll down to the Acton Swing Bridge. We walked along the towpath to bridge 210 and walked down the road to the bridge. 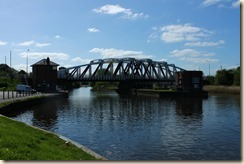 It is a very impressive structure and even though we have been through the bridge when we cruised the Weaver, seeing it from the land makes it all the more impressive. 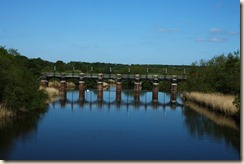 The weir at Dutton Lock in all its glory.

The river was very calm in the sunshine. Rowers were out doing their training sessions. 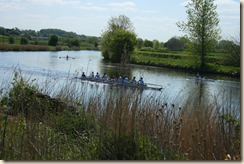 Beautiful day to be out on the river. 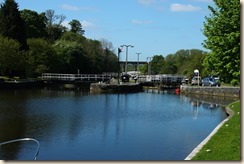 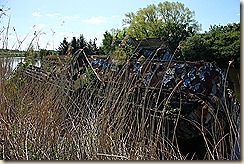 You cannot help but notice the sunken boat 'Chica' 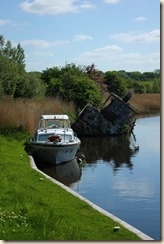 The MV Chica began its life in Norway in 1894, it was then  named ‘Flora’. Apparently she was commandeered by The Germans in 1940 and renamed, ‘Bjorg Haukaas’. In 1965 she was renamed the ‘Lill Tove’ and after being bought by the ‘Straight Shipping Company’ in Gibraltar in 1977 was renamed CHICA in 1981. She floundered in 1993 and she has lain here ever since. She had a very colourful life from all accounts, which included after the war found herself running guns in the Mediterranean and finally smuggling cigarettes and tobacco across the straights of Gibralter only to find herself as part of the fishing fleet in Liverpool bay in 1950. If she could talk she could fill a couple of books with her stories. 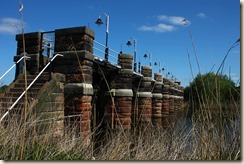 Having walked down to the locks and saw two boats ready to come up, we strolled back and took the path which would take us back up on to the canal. 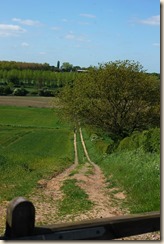 It was a pleasant walk on a cool but sunny morning.

Having been on board for a few minutes, there was a shout out from outside. It was our lovely and long time friends Ian and Irene on board Freespirit. 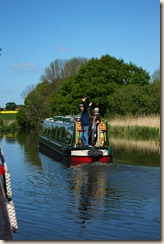 They pulled alongside and we did a bit of catching-up on where we had been. Irene and Ian had just come off the River Weaver. It was lovely to see them again. They are off to Liverpool, so if you see them give them a wave and say “Hello”.

It is wonderful to see friends and on this trip we have cought up with a number of people we have known for sometime.